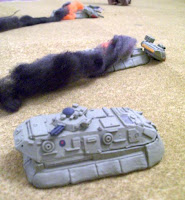 (1st Imperium, played by K-Tracts and Megz) infantry in two ACV APCs and two squads of
Terran ConFed troops (played by DW) to refresh my memory of the Striker II rules system.

The Terran ConFeds were dug in on a hill at the end of a valley, guarding a power plant. Stands (2 per squad) were armed with TL-10 5.5mm ACRs with shoot-through RAM grenade launchers, each squad had a TL-10 5.5mm SAW. Support stands (1 per squad) were armed with SAWs and man-portable tactical missiles. There was an HMG stand and a Tactical Command stand supporting both squads. 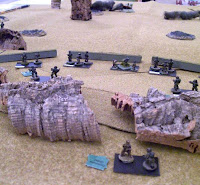 The Terrans were outfitted to reflect a light infantry platoon (though they were short a squad) like that of the contemporary 10th mountain or 82nd airborne - squaddies who get dropped into an area and told to "hold on" until heavier assets can link up with them. It's a helpful trope for making up a tough scenario.

The Ziru Sirka infantry stands (2 per squad) were armed with 7mm ACRs (practically the same for all purposes except giving a 10 metre range advantage to the Imps) with RAM GLs and 7mm SAWs. Support stands were armed similarly to the Terrans. The hover-APCs mounted a single VRF gauss gun and twin tac missile launcher.

Imperial objective was to seize the power plant complex.

Turn 1 began with the Imperial sections making a cautious move around the burning shells of Imperial GEV tanks (placed there by the referee as a warning against taking the Terran's anti-armour abilities lightly) to the cover of a rock formation and a blast crater.

Turn 2 began with surprise as the leading Imp APC (K-Tracs') kicked into overdrive and zipped up the left flank. Infantry ATGMs lashed out at the speeding APC while wide-eyed squaddies clung to their seat-straps and prayed to their ancestors not to punish their officers for failing to follow procedure.The two missiles missed (needing an 11 or less on a d20, reduced to 5 or less due to the vehicles speed (about 200 kph). 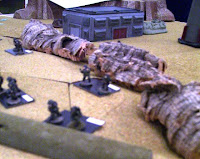 prayer of protection to the Gods of Parliamentary Procedure, and
kicked it into overdrive to avoid losing contact with #1 Section, which was dodging a second round of ATGM and RAM AP fire (Dice hated DW, the Terran player, who still needed a 5 to hit with the ATGM and a 1 to hit with a RAM AP grenade) while screeching (well, woooshing) to a halt and debarking its two squads.

Those Terrans who weren't firing were redeploying to fire. The rear of their position was rapidly turning into the front of the position - fortunately for them there was a rocky spine along the ridgeline they could use for cover. 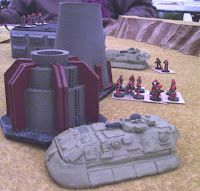 Turn 4. The second Imp APC trundled up and debarked a squad against the Terran flank, while #1 Section occupied the building complex and began to snipe at the ConFed troops along the ridge. There was some confusion as to where fire was landing, on the stands which were visible or on the squad as a whole (I ruled the visible stand was to take any hits - there were none). The APCs raked the ConFed lines with VRF gauss gun fire (11 to hit, reduced to 5 or less for cover). 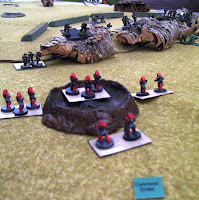 Troopers were starting to fall now. Megz had a hit on two stands, as did K-Tracts, and DW had multiple hits along the line.

Turn 5. The ConFed Line began to crumble (I mis-ruled that one of the ConFed squads had been Forced Back. It hadn't, though it's morale was tottering). At this point, I suggested we call the game as a Ziru Sirka win. The Vilani were sitting on their objectives and the ConFed troops didn't have the strength to dislodge them.

The biggest complaint came from the Terran ConFed player, who felt the Terrans had too little mobility. He was correct, and there should have been at least one more ConFed squad to hold the power plant buildings proper. Since we were playing a test game, I wasn't (and still ain't) too concerned about presenting an ebb-and-flow kind of scenario. The purpose was to build familiarity with the rules of Striker II, which was just as well, because reviewing the rules later on I discovered a passel of errors made:

"Forced Back" the squad or group must move a full cross-country move away from the enemy unit causing the Force Back result, EXCEPT if the unit is in cover. Then it just moves back deeper in the cover and then gets a "pinned" result. All stands take a Forced Back result when they receive the "red marker" (as the next hit will eliminate the stand).

A 1" LoS may be traced into a building area (ya'll like that 1" measurement in a centimeter-based game? We'll assume they meant "a 25mm LoS".) Concrete building areas give any stands within a +3 saving throw.

The radius for distributing small arms fire is 10cm (about 4 inches). This includes any personnel stands in the same cover as the target (which I suppose could include friendlies).

The Terrans, having the higher iniative (3 to 2), should have resolved fire first in each respective fire sub-phase (effectively allowing them to inflict hits and cause morale checks on the Vilani before the latter could respond).

A single stand can be moved without the entire squad moving. This would have helped the Terran player to selectively shift some of his infantry stands toward the power-plant without moving his tac missile support stands away from the "front" (they would be considered having a "No Order" order and thus eligable for opportunity fire).

A unit must move in the same general direction as their movement chit indicates, and must end with their facing in the same general direction as the chit indicates. (During the game, I ruled correctly and then redacted it in the face of player rationalisation.) The vehicle may freely change it's facing at the end of the final fire phase. (I'm supposing the intention is to allow an opportunity fire shot up the tailpipe if one is available.)

I also discovered the section on Tac Missiles just trails off without discussing counter-measures, flares, and chaff. I'm going to cull some ideas from Striker and Command Decision, from which both systems Striker II is derived. Ω
Posted by kmfrye2001 at 6:55 AM 4 comments:

Played a five turn game of Striker II last Sunday night with three other players, all of whom hadn't played SII before. The scenario was four squads of 1st Imperium infantry in two honking big APCs vs two squads of Terran Confederation

S_II doesn't lend itself as well to quick pickup as say, Stargrunt II. Also, it doesn't lend itself to quick lookups in the book. Despite the use of case point structure (something Frank C. doesn't particularly like) the rules have some gaps in them. Example - unit spacing. At no point do the rules say "Stands in a squad can be no further than x cm apart". The reader must intuit that, because order chits effect those squads within 15cm, stands in a squad may be no further that 15cm from the commander.

Further example - the section on tac missiles just stops at the end of page. Nothing on counter measures or decoys. One might suspect that the rest of the relevant section was lost in the formatting phase. (Michelle Sturgeon strikes again...)

That said, the basic rules can be transcribed onto a cheat sheet with minimal effort.

In the game we played, both sides were using Experienced troops, the Vilani with slightly higher moral (13) and slightly lower initiative (2).

Modifiers for cover yeild the equivalent of a range-band increase, so a firefight at medium range (avg of 16-18 cm) requires a 5 to hit, modified to a 2. Roll 3 dice (Rate of Fire) for 2s to hit. That's a 10% hit rate for most of the game.

In a nutshell, 2 squads of Terran Confed were dug in on a hill at the end of a valley, protecting a power plant. The Vilani Imperials entered with four squads and two ACV APCs. Rather than debark their infantry for a long, slow slog, the Imps instead ran down the flanks at speeds of between 110 and 220 kph, dodged the anti-vehicle missle fire which could have ended the game on turn one/two, deployed in the Terran rear zone on turn 3, and then pounded the Terrans on turn 4/5. The vilani were left sitting on their objective, leaving the Terrans without the strength to dislodge them.

I'll be posting some pictures and a more detailed AAR over the long weekend.

Amusing quotes
Vilani Section Leader has had his request for artillery support denied (there was a pre-game bombardment).
Section Leader: "Haven't you guys ever heard of 'Time on Target'?"
Artillery Battery Major: "Yes, and that 'time' was 0:600 hours. We apologise if you found the timetable inconvenient."

Vilani APC Section has zipped down the board flank, dodged 3 or so Anti-Vehicle missiles, and is disembarking troops in the Terran rear zone.
Vilani Section Leader: "I think I deserve a medal..."
Referee: "You might get one, if you aren't first found guilty for Gross Innovation ..."
Posted by kmfrye2001 at 6:03 AM No comments:

What I'm Talkin' about, Willis

Welcome to my first blog. Herein you, dear reader, may gaze into the shadowy world of miniature wargames, the obsessive lurking types that play them, and the occasional argument this hobby produces (in spates).
Posted by kmfrye2001 at 8:34 AM 1 comment: