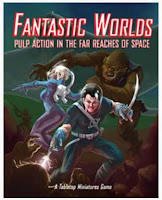 This has been a long-term project, which stalled for a two-year period.

Campy and cool, rowdy and raucous, resplendent with gold lamé, lycra, blasters and bondo, this film remains one of my favourites and when I was first introduced to Rattrap Productions Fantastic Worlds rules set, I resolved to put a few forces of Hawkmen, Treemen, Earthlings and Ming's  supporters together for some tongue-in-cheek gaming.

Below are the first installment - Ming's Security - available from Dirk Garrison miniatures.  They are painted in the mangenta  pink as seen in the film.  The gold trim was easier to paint than I expected - the masonic-style symbol on their chests was considerably less so.