Into Every Blog, a little rain...

Khurasan offers various “niche” sci-fi models, almost all of it off-beat. Some of these models are very nice – there is a swept-back grav tank that is very nice indeed.

Sadly, Khurasan doesn’t do so well in the field of customer relations, at least where I am concerned, or at least, not in my latest transaction.

Now, I like a certain “Traveller” look to my sci fi, and as many Traveller fans know, the later tech designs tend to have smaller turrets. Fortunately, or so I thought, the Khurasan website had different turret versions, so I contacted the owner (who doesn’t sign his emails, so it’s either Mike or John, but more of this anon) and asked if I could buy three alternate turrets. The reply, in toto:

“The pieces are not available separately.”

That’s it. Not even a “sorry” to dull the sting. Just a lofty, third person declaration. It’s not hard to surmise that the writer is thinking by the tone taken: “Next time, order the right bloody model.”

Tsk. Playing the blame game lets one party shift the blame and thereby relieve one’s self of any expectation for resolution. It’s best done when you already have your customer’s payment. I wanted to BUY extra turrets I wasn't looking for a hand out.

Also, this is my third order with Khurasan Minis - do I not get a bit of sympathy? A drop? ;) (Apparantly not - so siddown!)

Finally, I keep in mind that while Khurasan is not a big company, the owner has shown little hesitance to post on The Miniatures Page, usually often and at length. I’m not sure why his emails would take a different tone, although the idea that a customer complaint might create an adversarial response does occur.

So, armed with a sense of being slightly “had” (but only slightly - I did receive everything I had ordered - I just wasn't happy with it) I emailed back, explaining my dissatisfaction and disappointment. This resulted in a longer email explaining that all model pieces are cast in a single mold. Since Khurasan doesn’t cast in house, the owner couldn’t send any extra turrets without taking them from those models, rendering them useless.

Fair enough. Especially when you’re paying someone to cast your minis for you. I was a bit more mollified.

Hopefully, after some discussion, I was hoping that the owner might conclude that a little straight talk first is better than cryptic replies. (And if you think “cryptic” is too strong a word, consider how many other ways the question could have been answered (thusly:)

Dear Sir, unfortunately, our casting process does not allow us to sell individual parts at this time. Selling you “bits” would result in severe wastage for Khurasan Miniatures. We’re a small company, as you know, and couldn’t survive that kind of loss.

We do apologize.
The Man With No Name

Certainly a better reply than the first. Although anyone in business will tell you to sign your business emails, at least initially.

However, I then received an email from Khurusan stating that even if asked on the Miniatures Page, the Khurasan Policy (no substitutions/replacements) would still hold. Hey? I had only mentioned that Khurasan should try to keep his direct business emails as conversational (and not clipped and adversarial) as his TMP posts. Clearly, whoever is writing emails at Khurasan isn’t reading them properly, at least not mine.

To my way of thinking, there’s something suggesting unseen stressors at Khurasan Miniatures, and until these are resolved, the jury remains out. Either that or we have someone who keeps a different face on The Miniatures Page than he does in direct email with unhappy customers.

As a post script, the final exchange (aka blowoff) ran thus:

Well, whatever you think is best. Happy gaming!

This is a thinly veiled "whatever!" and was in reply to an email wherein I clarified the point about TMP:

KMFrye wrote:
> Mike or Jon(?)
> I'm not suggesting that you would not apply a policy evenly, or make an exception for TMP.
> I'm pointing out that you post on TMP often and at length in a conversational tone, but your personal emails in this issue began terse and off-putting (even adversarial). I would have been less likely to feel badly treated if you'd explained why in your first response.

> Remember, none of us *need* your product, we only *want* your product. That want can change at the speed of thought, and you can have a big impact on what we think by how you talk to us.
> It certainly has on me - I was thinking about placing another order (parasarachnids, artillery tank) but I'm now put off the idea.
> Sincerely,
> Keith F.
> P.S. It wasn't going to be a very big order anyway, and the artillery tank can be represented off-board.
> P.P.S. Not signing your emails is very unprofessional. And evasive.

So, a note to self to beware any further trade with Khurasan Miniatures. I never did have a problem with him, until I had a problem with him. And when I asked for some satisfaction, I got a shirty, adversarial, kinda arrogant (though not really enough to be certain of that last - he might just be that thick) set of replies, which left me feeling…discarded.

Not signing emails – especially business emails – is unprofessional and evasive.

I wonder what Mike or Jon or whomever really is Khurasan Miniatures is evading?…Ω
Posted by kmfrye2001 at 4:39 PM No comments:

Meanwhile, in Space, in an altogether different franchise…

Back in the Golden Days of TV Space Franchises. we would gather in a friend’s basement to play war games. But first, we would watch a series that told of the Third Age of Mankind, and a place named

My circle of wargame pals have been Bab 5 enthusiasts since the mid 90’s. Me, I liked the pilot, though I must admit to initially only catching the last half. Anyway, we’ve been table-top gaming B5 for a good while.

When an invitation from my friend DJ (in gaming aka Ming the Merciless, and not because he looks like Max von Sydow) arrived to teach the Full Thrust system to his friend, Jay, I decided to teach it using the B5 Earth Force Source Book modifications.

The scenario was set during the Earth Alliance Civil War (and sometime before the episode “Severed Dreams”). An EA Loyalist patrol (commanded by Jay) of two Omega Destroyers and an Olympus gunboat encounters an EA Separatist patrol (commanded by DJ) of two Hyperion cruisers and an old Nova dreadnaught (these are the B5 side, cheer for them!). Each side’s objective was to clear the enemy from this sector (which happened to be the Euphrates Sector, but more of this anon).

BTW, Jay vs. DeeJay? Isn’t that a bit confusing? Such is the tragedy of a civil war…

Turn One: Both task forces began the game at speed 4,

representing a normal cruising speed. The Loyalist taskforce enters through the jump gate, accelerates to 8, and deploys fighters. The Separatists also launch fighters. Both sides are evenly matched with fighters - this does not bode well for the fighter jocks. 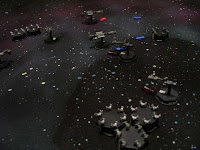 Turn Two: Both sides fighters flashed forward, and immediately locked themselves into a series of furballs. The Separatists turned to starboard to attempt to keep distance, while charging up the lasers on the Nova. A single flight of starfuries slipped past the otherwise-occupied loyalist fighters to strafe one of the Omegas. The Loyalists accelerated (rather unexpected by both the Seps and the ref, who thought Jay might be more cautious, considering his first game and all…impetuous youth) and by doing so caught the Nova at medium range. 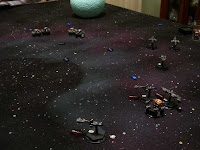 The Loyalist heavy lasers flashed, and an entire damage row disappeared from the Nova. Several lasers fell off, including those charging. Oh dear.

Turn Three: The Loyalist Olympus gunboat had zipped forward last turn, wee little railguns powering up. As the two rough battle lines passed, and pulse cannons exchanged a deadly caress, the Olympus discharged two high velocity depleted uranium sabots at the Nova. One struck, dealing two points of damage, which is really a pittance, unless it leads to a threshold check, which this did. More systems went down, fell off, or were sold off by the PTEN.

Turn Four: The Separatist commander considered that without his main laser platform (the Nova) his two cruisers were no match for the Loyalist taskforce, and accelerated for the jump gate. The Loyalists let them go, having a bigger fish to fry – a 2.5 million ton fish...a place named: 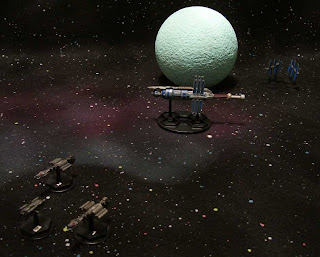 It had been about four years since I’d played the Full Thrust/B5/EFSB mod. Back in the day, we had migrated over to this from Babylon 5 Wars, a fun but somewhat slow game from the now defunct Agents of Games. Even back then, we tended to avoid using the elder races, as they were just too powerful for an enjoyable game. For FT purposes, we stick to the Narn-Centauri conflict, the EA Civil War, and some White Star – EA/Shadowtech scenarios.

Due to the nature of the conflict, EA fighters tend to charge into dogfights like English Civil War cavalry rush into melee, thereby removing themselves from the rest of the battle. Ah, this war without an enemy…

Fighters in Full Thrust are too effective as written for use in B5 games, so we usually halve their effectiveness – 1 die attack per two full starfuries. Starfuries are rated as heavy, so they take a hit on a 5 or 6, with a 6 eligible for a re-roll.

The scenario plan actually came from the FT/Traveller mod, Power Projection: Fleet. The PP:F scenario engine is useful beyond measure.

Losing his main laser platform is hardly like DJ on a normal day. Post-game discussion had us agreeing that the Nova should have been kept back, behind the Hyperions. This would have allowed the cruisers to coordinate their fire with the Nova, which could easily have knocked out an Omega Destroyer. Jay’s rapid advance caught DJ off guard – apparently Jay has learned from other games not to let DJ’s battle plans develop.

Upon seeing the miniatures, Jay commented that he remembered the Babylon 5 series from when he was a kid. Saying nothing, I could not help but notice the umbilicus trailing him as he walked about the game table.