This past weekend, I took a break from working on West Philly buildings in favour of painting some reinforcements for the Norton Agency.

Reverend Iley Bright operates the Bethel Baptist Bible Mission, a store-front church that aids and supports the neighbourhood, (and occasionally, the Agency) spiritually and financially. A blood-and-thunder preacher, he has been known to take to the streets in a righteous cause, brandishing a shotgun and the Bible, because "You get more respect with a shotgun AND a Bible..." 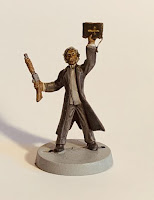 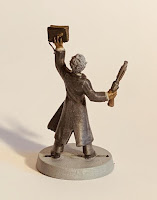 Miniature is a modified Reverend Grimme from Deadlands.


The next miniature hasn't yet had a character name (actually, I like the name of Dynamite Jackson...) assigned; he reminds me of the fellow from Black Dynamite (a jolly great film, btw). Action Jackson is from RAFM, in their Modern Heroes category. 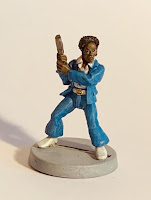 He so cool, he give Morgan Freeman pneumonia. I used him straight out the box. I would love to see a pack of disco/leisure suited investigators, some in shades, to round out "That 70's Look".

One of the fascinating aspects of 70's wargaming is 70's fashion - a cavalcade of man-made fabrics that would burn like a chemical fire should misfortune strike. Still, it was visually stunning.

Lurex is one such fabric. Quoth Wikipedia, Lurex is "...yarn is made from synthetic film, onto which a metallic aluminium, silver, or gold layer has been vaporized. "Lurex" may also refer to cloth created with the yarn."

Lurex is still extremely popular in the music industry, but we've all seen it: Julie Newmar's cat suit from the original Batman TV show was made of Lurex. Now I understand the name.

I decided to attempt a Lurex outfit, based on a picture of Swedish model Ulla Jones. Two types of glitter-based craft paints were employed; a gold glitter with smaller spangles, and a clear glitter with larger ones.

The miniature is available from Casting Room Miniatures as part of their "Tedious Hippie Scum" set. 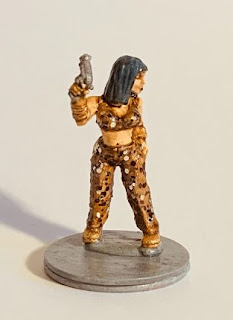 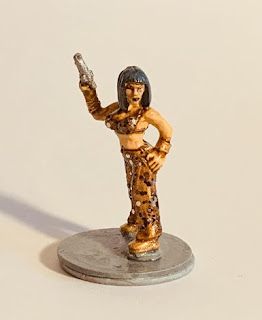 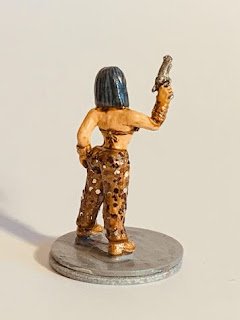 These are the third set of pictures, taken with Megz' I*Phone - it allows me to compensate for the myriad of different light bulbs used in our home.

The bit of gloss on her hair and skin is a side effect of the paint-on dullcoat - it ain't dulling.  I might need to hit the fig again to take off the last on the sheen, without dulling the sparkle of the sequins...Ω