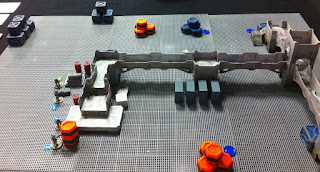 This year's past TravellerCon provided a great opportunity to break out the Cargo Deck of Doom, a generic setting for 28mm Traveller (or indeed, any Sci-Fi) miniatures, and I was able to run two games with rather different results. 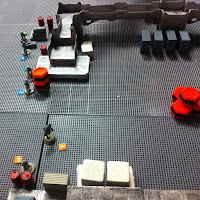 The cargo deck itself is composed of cross-stitch mesh, painted gray, on foamboard. with various bits of cargo, and platforms (by Dwarven Forge) providing cover and points of interest. The card-stock raised walkway is from an Italian company (Century XXXI Barricades) and is OOP. I'm sure a resourceful gamer could contrive the equivalent with something in MDF board.

This is essentially a bug hunt scenario, except, as in Soviet Russia, the Bugs Hunt YOU.

To keep it interesting, the boarding party (in this case, the lousy, stinkin', dirty Zhos) are instructed to search the cargo area for a hidden diplomatic pouch (or Cosmo DNA, or Ruby Slippers, etc.) The referee can mark the cargo to indicate the desired goal, roll randomly, or, as I did, use a small bingo/poker chip.

The scenario is on with which most old Travellers can empathise - a bug hunt featuring the Chamax horde. The last time I played with the Chamax, I used the 1st ed 5150 rules set. This time, I used Full Metal Anorak, a beta-version of the scaled-down StarGrunt II rules from Ground Zero Games. StarGrunt II is free for downloading - buy some miniatures from Jon at GZG if you like them.

I recommend interested readers use their solid skirmish rules of choice. FMA was never released commercially, as a result, IMO, of "too many cooks". I suspect, someday, there will be a free PDF available. Hope springs eternal...

Even in it's old beta-form, FMA was more satisfying that 5150. Both groups said they really enjoyed the game. That gave me a happy. 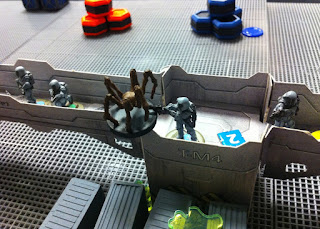 I ran an encore game the second night (Saturday). The first group had been fortunate in their rolls, the second group somewhat less so. Being psionic, the Zho command was ably to pass actions outside of the normal FMA command radius. It was also amusing to watch the Zho commander telekinetically lift a cargo barrel and slam it down on a chamax - the resultant acid burst killed two adjacent bugs as well. Nice.


For future games, I'm going to make the chamax slightly easier to kill - death on serious wounds or better. It would also be fun to add some Imperial opponents, marines and navy crew, to give the Zhos something else to worry about...Ω.

Between phases of building my next 7TV extravaganza, I was able to finish some Vilani Imperium officers, staff and gunners.  Included in the photo is an old Force XXI ACV Infantry Carrier.


These are from GZG # SG15-J14 and SG15-J15, being part of Jon's new updated Japanese Corporate release. They are smart little figures, and I'm looking forward to deploying them as part of my Imperial 484th "Nusku" Infantry Brigade.


The two chaps on the single "squad" base are from the initial, pre-2014 GZG release. They are fully compatible with the new sculpts - though they lack some animation...Ω