The Narn-Centauri War broke out anew last night as the Friday Pals met to try Starmada: Admiralty by Majestic 12 games.  I brought out my AOG B5 Fleet Action miniatures. In past games, we have been using a modified Full Thrust/Earth Force Sourcebook rules set by Jon Tuffley , and while the carnage was everything one could hope for, some dissatisfaction about the movement of ships had cropped up. Starmada:Admiralty was going to help prevent the fleets from closing too quickly, and preserve a "fleet action" feel.

The year was 2259, the name of the place is Ragesh 3. The Centauri have a Marcanos-class base and a small fleet protecting it.  Two squadrons of Narn cruisers with two squadrons of Narn heavy destroyers enter the Ragesh system - their orders is to sweep and clear the system of the Centauri.

Rob C. (as Lord Cassdo) and myself (Lord Frylari) took the Centauri (Rob had the fleet, and I manned the station) while Warleaders D'Jay and K'enzie assumed the mantle of the thrice-damned Narns.

The Centauri squadron consisted of: two Primus battlecruisers (with attendant fighter flights), two Sullust destroyers and a Vorchar Elint heavy combat vessel. The Marcanos base had four flights of fighters for system defence. The Elint vessel protected any friendly ships within 4 hexes by jamming enemy sensors and increasing the range by one band (i.e. medium range to long range, long range to no target).


The Narn had two identical squadrons, each with: 2 G'Quan heavy cruisers, a G'Quonth attack cruiser, and two Katok battledestroyers. That would be a total of ten warships against five plus a base.


As the outnumbered parties, the Centauri had to destroy twice as many points of ships than they took as casualties to win  The Narn had to clear the system.

Turn 1 - 2 Opening moves. As the opposing squadrons closed, the fighters swooped in to engage their opposites.  B5 fleet games usually involve masses of fighters, and we've learned to try and hold a few flights in reserve to use against ships. So, instead of engaging in the optional Dogfights, the Centauri fighters stood off at range one while engaging the Narn and the Narn complied. The Narn, having more fighters, quickly gained the advantage in the fighter fight. 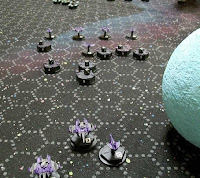 Turn 3b - It's a Trap!  A second Centauri squadron, identical to the first, hidden in the planet's sensor-shadow, entered the battle.  Fresh fighters rushed forward  while the surviving Centauri flights withdrew to the relative safety of the Elint jamming field. When the Narn tried to track them, they found they were unable to fire (long range = no target).  Warleader D'Jay was outraged, and promised terrible retribution against the perfidious Centauri plague.

Turn 4, 5 - CGI Rendering Slows to a Halt.  Or that's what it felt like.  As the main fleet elements began to trade laser and pulse volleys, the game slowed to a crawl.

To Centauri dismay, the armour on the Narn cruisers was proving hard to crack (a bit too hard, if you ask me). The Narn lasers were carving up the larger Primuses at an alarming rate. The station had moved closer in it's orbit to the protective Elint screen, but hadn't quite reached yet, and was being pummeled by energy mines.


Endgame - It was getting late, so we called the game for the Narn - they had inflicted about 60 damage points to the Centauri 30. As one Centauri philosophically observed "We had them where we didn't want them..."

While I enjoy playing the Centauri, mainly due to their cheerful methods of skullduggery, I had intended to referee this session, due to the number of "gotchas" the Centauri were employing (Elint ships, and ambush).  Fortunately, while DJ was suitably outraged at each turn of the worm (or Spoo - 10 credits an ounce, if you can believe it), it didn't effect the outcome of the game. The Centauri still lost.

I had more detailed fighter flights printed out, but failed to bring them to the game. Thus all the fighters were treated as "standard" when really, the Centauri Sentris should have trait "Dogfight (+1 against fighters) and the Narn Frazis should have "Anti-Ship +1".

The B5 templates (downloadable from the MJ12 forums) need auditing.  The points were off, with the Centauri having about 50% more points then the Narn.  Certainly, the Narn Energy Mine needs some tweaking.

One of the reasons we used Starmada Admiralty was to limit ship speeds so the fleets actually operated like fleets - that was satisfactory.

We had high hopes for Starmada Admiralty, but there are some issues.  Movement aside, the single biggest issue we had was with the damage resolution phase. It seems straightforward enough - roll to hit, roll to penetrate shielding, roll damage - in practise, the game slows down drastically when more than a few ships are involved on each side.  This should improve with practise, so perhaps a smaller fight is in order for the next run.

We've agreed to try again, and I will add some game data to the ship rosters to help speed the game: advanced firing arcs, ship and weapon trait effects, damage charts, etc....Ω
Posted by kmfrye2001 at 10:28 AM 2 comments: