Here's an older set of photos from a Friday Pals game using StarGrunt II in the Traveller universe. This was a simple scenario played on the Cargo Deck of Doom. Zhodani Marines are attempting to take over an Imperial freighter, while the Imperial Navy and small Marine detachment resist.


Denizen Ventaurans were used for the Zhodani, supported by RAFM Traveller New Era warbots. The Imperial crew were GZG Security and UNSC Marines. The terrain was a combo of Century XXXI cardstock barricades, used as a raised walkway, with two of the Dwarven Forge Sci-Fi Expansion Set, plus scattered bitz from Grendel, Mystic Moldwyrks, and GZG. 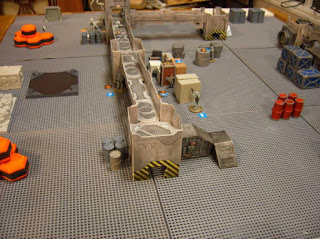 The single biggest innovation for this scrum was adding the warbots. SGII doesn't really address the issue of robots, so we gave them d12 armour and 2 hit points - thus it took two "kills" to take out a bot.  Until the second "kill"  result, the bot would operate with damaged/reduced systems.  This made them pretty dangerous.

One of the few things the PBN had going for them was the Mighty Slug Pistol - able to fire AP and HE rounds, with a 1.5" burst radius, the navy was able to suppress the Zho Marines - but not the warbots.

While the Zhodani used weren't representative of the dreaded Consular Guard, we did want to represent some psionics, so we gave the Zhoes a bonus on their reactivation and rally rolls, to reflect the officers' telepathic ability.  This allowed them to keep up their attack when they otherwise would have failed - this is balanced by rating them "regulars" instead of "veterans", to reflect the conscript nature of Consular forces.

The result was the dirty-stinking-Zhos pushing the Imperials out of the cargo hold, allowing them to consolidate and bring up reinforcements - the fate of the ship still hangs in the balance.
...Ω
Posted by kmfrye2001 at 8:10 AM 5 comments:

Interstellar Wars: The Defense of Alpha Centauri B


In preparing an article for an upcoming Ragnarok, I decided to compare Future War Commander with Jon Tuffley’s Dirtside II. Before doing so, it was necessary to re-acquaint myself with the DSII rules, as while we play StarGrunt II fairly regularly, we hadn’t played DSII since the late 90’s.  Bearing in mind that DSII will be twenty years old in 2013, the Friday Night Pals went with a simple scenario, based on a situation well known to anyone who has played GDW’s IMPERIUM – a planetary invasion.

Since we were playing using 15mm miniatures, we increased some of the distances, like command grouping (extending from 3” to 5”) while leaving other ranges unchanged (movement, firing ranges). The Usual Suspects were playing: Rob C., DJ and Kenzie, with yours truly refereeing the game.

Scenario: The Third Interstellar War is not going well for the Terran Confederation. The Imperium has sent the defeated remnants of the ConFed fleet back to the Sol System where they are scrambling to defend Earth. The confident and haughty Vilani have decided to pause in the Alpha Centauri system to reduce that system to obedience. The Terran 8th Interstellar Division is supporting the Alpha Centauri B Planetary Defense Force, with orders to fight to the last Infantry Anti-Vehicle Rocket.

Using counters from GDW’s Imperium game, I randomly drew what would be a standard-sized garrison of a Terran world in your garden-variety Imperium game – a “2” strength army plus PDF battery.  Each strength point would equal 1000 Dirtside points. To make things manageable, I reduced the points to 2000 attacking 1000.   The Vilani would be attacking at 2-1 odds.

The PDF anti-space missile battery was set up on a mid-sized hill, with an administrative building/barracks adjoining. Four squads of Terran infantry were dug in amongst the silos, supported by light APCs, while a half-troop of light tanks, anchored to the admin building, held the right flank.  On the Terran left, a GMS/L team held the high ground. A separate mortar battery held the high ground to the rear.

The Imperials had a platoon of line infantry – eight squads of infantry on four heavy GEV APCs, plus a Fire Support/Point Defense GEV AIFV, all commanded from a GEV TOC.

Turn 1 – the Imperials advanced and their infantry de-bussed and set up their light RAM mortar.  Terran missiles flew fast and furious as Terran mortar shells began to rain down.  The Imperial Point Defense vehicle was able to stop most of the incoming fire (good shooting, Kenzie) and bad rolls on DJ’s part stopped the rest.


Turn 2 – Encouraged by the poor Terran showing, the Imperials advanced.  A squad of Imp infantry that wandered out from under the protective point-defense umbrella were hit with mortar fire and wiped out. Random fire also took out their Imperial APC, as the dreaded “boom” chit made it’s first (but as you will shortly read, not it’s last) appearance.

Turn 3 - The Terran tanks gained two kills on the nearest Imperial APCs (two more “boom” hits). The PD AIFV now switched to it’s Fire Support role in an attempt to knock out a tank, but failed to hit.

Turn 4 – the Imperials were now doubtful of their success, and I was inclined to agree, but I also asked them to game out an infantry assault on the defended positions around the missile silos, which they gamely did. Four squads of Imperial infantry stormed up the slope (losing a squad in the process) and chased the Terrans out of the position.  Even if they had carried the position, the Terrans were in control of the rest of the objectives, and we all agreed it was a Terran win.

After years of playing StarGrunt II, going back to Dirtside II is very similar to the proverbial walk known memory lane.  One can see how the DSII system will be refined in SGII, and despite it’s age, DSII still makes for a fast, fun game.

We had misinterpreted the F~ chits, and instead of applying them to the firing unit (you press the fire pedal and nothing happens) we were adding them to the target’s woes.  Live and learn.

The Point Defense/Fire Support vehicle is a mixed blessing - it works great knocking down mortar rounds and missiles - especially from the lower tech earthlings.  When it switches to direct fire mode, that safety umbrella is lost, and it's not too good as a tank killer.  One must time this carefully. I love it.

A rematch is planned, either with the original group or with the Ratrap Hill Mob in Maplewood. Ω
Posted by kmfrye2001 at 9:40 AM No comments: