Crucible Crush - Nice Minis, Once You Get Them...

Late in 2019, a new line of miniatures was teased by the redoubtable Bob Murch, of Pulp Miniatures. Originally at home on the Pulp Miniatures page, the Black Sun line of Weird Viet Nam War eventually moved to Crucible Crush Miniatures. Crucible is managed by Lee van Schaik, nephew and son of the RAFM van Schaiks, and the connections to RAFM are apparent from even a brief glance at the various miniature lines offered.

For starters, Black Sun is a set of rules and campaign setting for Viet Nam Weird War, set in 1968. Of course, with my current fixation on 1970's street skirmishing, my interest in the project was immediately piqued.

While I'm not much taken by the Viet Nam setting - thus the GIs and VC are of little interest to me, likewise neither are the rifle-armed Adaro/Deep Ones (if they were armed with spearguns or eldritch magic weapons that looked like spun coral or metallic driftwood, I would change my mind) - my main
interest is in the Children of Hastur.

Hastur the Unspeakable is reckoned the brother of Great Cthulhu, and awaits imprisoned beneath the lake of Hali, either in or near the Hyades. Hastur was created by Ambrose Bierce, expanded upon by Robert Chambers, adopted by H.P. Lovecraft and fleshed out by August Derleth.

Crucible Crush has released three sets of the Children of Hastur.

Some Black Sun 28mm figures from Crucible Crush Miniatures arrived in the post one fine day last year, and I was, and remain, well pleased with them. Sculpted by living legend, Bob Murch, these figures are excellent. Three packs of miniatures were ordered: The Children of Hastur group. Three sets of un-armed and rifle-armed Hippies. Various states of mutations are shown, none, almost none, tentacles galore. There is an excellent "Charles Mansion" in jeans and freaky beard, a rich, daddy's girl "Tanya" in headband and SMG, and a number of other, less remarkable but well sculpted extras.

For Crazy Charlie, I removed a cluster of short tentacles from back of his right shoulder, as being just a trifle much. He's chanting from an Unspeakable Tome, anything more is just dotting a capital I.

The Hippie with the pistol originally had an M-16. He was converted using a an pistol available from Crooked Dice. Crooked Dice seems to be the only miniatures company who had the stroke of brilliance in adding an extra hand weapon or head to the base of their metal figure sprues.

The order was late in coming, well over a month. Once I emailed CC, Lee v. S. was quick in shipping it out - so quick, in fact, that a miniature was left out and a duplicate miniature included. I'm an odd duck, in that I would like what I've paid for, so I shipped the odd miniature back, with an explanation and a printed PICTURE, from their web store.

Almost another month goes by - I actually have no reason to expect my parcel ever arrived, since the address is shared with another business, but I email anyway.  They replied that they thought my replacement went out in early July - I inform them that it's quite possible; some of my parcels did go astray, disappearing into the black void of Camden County, NJ.

So, Lee kindly offered to send another. Which arrived.

And was the wrong miniature, again.

There's a point one just stops, and this was it. Perhaps they regretted that particular mini - a Black Panther "militant"?  The game industry is busy tying itself in knots over "woke" alleged-players.

But, no, as an email reply to my inquiry assured me there was no agenda, political or otherwise, they'd just got it wrong, twice.  They did assure me they were doing their best...

That's good to know, and a bit bad at the same time. "I did my best" is an admission of failure, it's what Dad or Granddad or "Coach" told us when we lost to the other team. It's what we tell our boss, after we skew the pooch at work, hoping s/he won't fire us.  To claim one "did their best" is to acknowledge your "best" isn't really good enough. Failure wasn't for lack of trying, it was for lack of doing.

The answer is, to do better, and the remedy is to review your processes and locate where and how the errors are occurring, and fix them.

Maybe the packer is doing six orders at once "to save time".  As a university student, I hand packaged for an Aerospace supplier, and we were told NOT to work on more than one order at a time, because any time saved would be lost "times ten" in straightening out the error, and we could possibly lose the customer. "People can get parts anywhere" my boss once said. "We have to offer superior service to keep them buying from us."  That was 30 years ago, and they're still in business.

In the end, the missing figure finally showed up - Lee van S. said it was a matter of personal pride, and to his credit, he stuck to it until he finally got it right.

The Night Stalker in 28mm 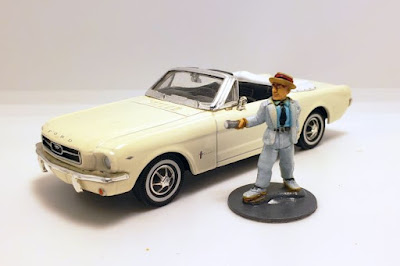 No urban game set in the 70s, which included supernatural elements, would be complete without including a certain newshound who, in the opinion of his editor, "looks like he just came from a road company performance of "The Front Page."

The character is question is, as you have doubtless already concluded, one Carl Kolchack, reporter and journalist, and associate of the Independent News Service.
An excellent proxy model can be found at Pulp Figures, in their "News Hounds" pack, which also includes a potential Obstreperous Editor, plus sundry other Front Page folks. 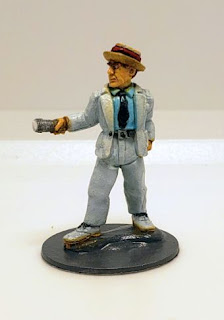 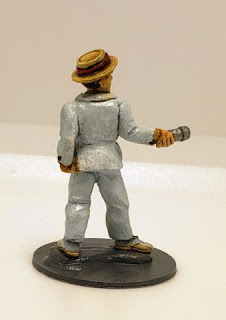 For 7TV1 purposes, I would use the "Investigative Academic" profile, and purchase 3 Luck points. Our Carl always seems to be able to pull himself out of the fire...Ω
Posted by kmfrye2001 at 7:39 PM No comments: