Two weeks ago, Megz and I had another visit with the Wargames Association of Metro Philadelphia (The WAMPS) and decided to test my basic concept for a bug hunt scenario, featuring Traveller's favourite Alien derivative, the Chamax Horde. Miniatures used are Denizen Ventaurans, and WoTC D&D Mad Slashers. Acid Splash and Suppression Markers were from Litko.

These wicked wee beasties have featured on my blog in the past; this time, Zhodani troops, supported by their famous Teleport Commandos, would attempt to quell the Chamax threat.

The situation at hand: A Zhodani agricultural colony has had an outbreak of Chamax, and a platoon of Zhodani regular lift infantry is sweeping a protected farm for bug contacts.

We were using the beta test of Full Metal Anorak, basically an abandoned rules set, derived from GZG's StarGrunt II. Supplementing this were element of Nordic Weasel's Bug Hunt, part of the Five Parsecs from Home rules group.


Players take the part of the hunters, whilst the bugs are run automatically. In Bug Hunt, there are contact markers (we're using chits) and objective markers (again, chits) which I assigned random rolls once encountered. There was also a random value assigned (my own inclusion) which meant that players could compete with each other, while also working together.

I was also using the Bug tables from 5150, hence, there are a lot more bugs than you tend to have in Bug Hunt. OTOH, there are also more soldiers.


Bug Hunt assigns a random set of d6 for rolling  movement and aggression. To simulate the chamax state of "questing" - where the bug is not actively attacking potential food sources, I altered the aggression level down to a d4, making it less likely the chamax would attack unless a figure got within 8" (movement range).

Once a bug was killed, however, it emitted a radio/psychic shriek, which caused all other chamax on board to increase their aggression dice by one die type. This would eventually max out at a d12.


The Zhodani Infantry were standard line, so they were armed with 4mm Gauss Rifles. These had an impact of 2d6, vs the Chamax armour/toughness of d8. A trooper had to at least double his impact roll vs the chamax defense roll to kill it, or else there was no result (alien biology, and all that...)

As an added bonus, when a chamax is killed, it's because the acid sack behind its gullet was ruptured, causing a spray of fluoric acid and molecular debonder to shower out in a 1.5 inch radius.


The first two turns were spent with the Zhos advancing cautiously toward the contact markers.  half proved to be non-contacts (random wildlife fleeing the area, puddles of digested colonists, etc.), but still worth VPs.  The first chamax contacted was blown away fairly easily - as Megz noted, a little too easily.


As each chamax died, another 2d6 swarm would activate, with dead figures recycled back into my "bug pool". Then they enter via a random map edge. By the third/fourth turn, there were bug swarms on all sides of the Zhos, except to their left flank.

So they began to draw together.

And they called for help.


One of the nice things about playing the Zhos is their high degree of telepathic officers and NCOs - all of them, to be exact. This means that actions can be passed from higher ups to riflemen with greater flexibility than in Stargrunt II or FMA,  Another perk is you can ask for help from the Consular Guard Commandos, who can teleport in like...magic.

A fireteam of three commandos and senior NCO was held in reserve for just such an occasion.

Armed with PGMPs (Plasma Gun, Man Portable) and the comforting thought that they could, if necessary, just manage a quick teleport back to base if things got too dicey, the Commandos arrived. The Effing New Guy in the team got teleport sickness (out for a turn - suppressed) but the rest opened up on the bugs with their plasma guns - with devastating effect.


Chamax melted and burst, sending showers of acid on those bugs next to them, causing them to melt and burst as well. A cheer went up from the encircled Zhos.

And other hives in the area were beginning to activate, as well.

There were three waves of chamax swarms coming toward them from the building area, and the Zhodani decided it was time to breakout back to their rally point, call in an airstrike, and then return for the mop-up sweep.

First though, they had to deal with the bugs that were reaching them.

Chamax have no morale to break, so they keep coming until they're all dead or you're all bite-sized niblets. The two or three survivors of the plasma-storm reached the commandos and attacked.

In melee, chamax get two slashing attacks - if both are successful, there is an automatic acid-laden bite on the following turn. Also, armour is degraded by one level for each bite, this can continue even after the bug is dead. And speaking of dead - don't forget the acid spray.

Three chamax sprang at the commandos - the senior NCO/TD* was able to use his gauss pistol in melee and got off a lucky shot, killing the chamax and spraying everyone in the immediate area with acid. The two commandos took a couple of slashes, but not enough to warrant the dreaded bite attack.  By the second round of combat, the NCO had killed another chamax and acid spray did the rest to its companion.


With armour smoking and more Chamax on the way, the Leading Officer saw the opening and gave the telepathic code: "Guardsmen, we are leaving..."

The final result was Megz had gathered more VP than myself, but the calling in of the Commandos had elevated the priority of the sweep, meaning we'd be going back in after a quick refit to take out the Maternal/Queen. So no clear victory as far as a campaign would be concerned.

Post Game Thoughts:
Usually, I find games with the Chamax Plague to be lots of fun, and this was no exception. There is plenty for the players to do, while the mounting numbers of opposition keeps the pressure on to take objectives, gather clues and keep from becoming tomorrow's leftovers.

My main thought is the chamax might be too vulnerable to their own acid. With a d8 Strength vs. a d8 defence, it seemed that they were dying more from their own acid than from Zhodani fire. I'll need to play again and keep closer track of the casualties.

Bug Hunt has more tweaks and options I'd like to incorporate, like Location Effects. Kinda like Objectives/Clues except they effect the environment, possible slowing bugs down or delaying swarm activations.

Plans are to run this at Cold Wars and at GZG:ECC in March. I'm going to add some grain silos and water towers, as well as an out building or two.  That will reduce the lines of fire a bit and make the game more...interesting...Ω 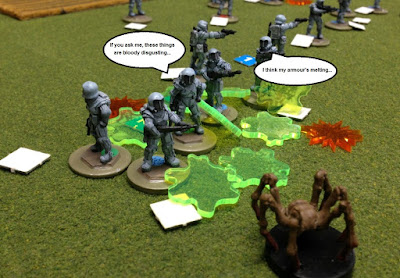 These figures presented herein were finished over Thanksgiving(US) weekend, only I haven't had me camera out for some good photies - and the table is cluttered with ongoing projects.

These two (above) are part of the Copplestone Casting "Soul Section" - the third member was posted here. I liked the plain plaid pattern shown on Copplestone's website sample, and did my best to simulate it, to mixed effect, on the figure in the foreground.

Behind the Road Champs 1970 Chevy door, the second figure was a more straightforward paint job. The black leather jacket was underpainted light blue, and I'm pleased with the final result.

This pair will represent the Harwin Brothers, another freelance "Troubleshooter" team, sticking it to the Man and Cthulhu in equal portions. That last bit might go on their business cards as the motto.

Finally, a RAFM Dimensional Shambler creeps up on the Black Cat Miniatures Photo Journalist. The Photo-guy paint-job is based on an old pic of George Lucas, circa "American Graffiti" with a bit more grey-white frosting that Lucas acquired later in life. Plus bluejeans, army vest and a lumberjack shirt.

For 7TV1 games, I'm planning on making photo-journalists non-player effects, giving them the ability to grant Audience Appreciation points to any Hero or Villian that starts the turn within 6" of them.  This is similar to 7TV2's treatment of TV Cameramen. Of course, Villains and Monsters will get VP for killing/incapacitating/munching Photographers, making it incumbent upon the Heroes to protect them....Ω


Five Parsecs from Home (5PfH) looks to be an amusing way to generate sci-fi skirmishes without a lot of campaign back-logging.  After reading these rules, I decided to match the campaign shell to Full Metal Anorak (GZG's abortive StarGrunt II skirmish rules).

While I have a ridiculous amount of 25mm sci-fi miniatures, they are mostly old Grenadier Star Wars minis, and I wanted to capture the Traveller-esque flavour of 5PfH.  Fortunately, I had been given a small pile of 28mm sci-fi some years ago, and after a rummage about in my abandoned 5150 project, I was able to assemble and paint my first 5PfH crew.


These are all Heresy 28mm SciFi, except for the auburn-haired gal on the end, which is EM4, painted to look like Hillard from Alien:Resurrection. Andy over at Heresy Miniatures hasn't added much to his scifi selection of late, and two of the figures seem to have been dropped from the catalogue.

Pity too, as I remember they were offered as part of a four-figure "Ship's Crew" set, which work very well together, as the reader can see - with matching jackets on three of the four. All four have badges on their jackets/vest, which make for nice corporate markings (and which my camera work doesn't show...). The engineer has the most variety, and I painted his undershirt black, and gave him non-regulation footwear.

(The scattered terrain in the background is for my 1970's 7TV game - yes, that's an old fashioned cigarette dispenser behind the blue post boxes. How times have changed.)

Coming soon: I'm working on another crew/gang, based on the crew of "The Betty" from the aforementioned Alien:Resurrection...Ω