The Friday Night Pals met to play a session of the Traveller/Full Thrust hybrid, Power Projection: Fleet. Set in the Sol Sector, during the 3rd Interstellar War between the Terran Confederation and the 1st Imperium, the scenario saw an Imperial fleet sent to bombard a ConFed facility on the contested planet Dushaam.  Two ConFed cruiser squadrons were tasked with preventing this and also to drive the Vilani fleet from the system. Rob C. and DJ were tasked to play the earthlings, while Kenzie and myself played the Imps.

The scenario was generated using the PP:F Scenario Generator.
Fleet elements were pointed at about 200 points per side – the Terrans having a slight advantage, which seemed fair, considering that the Imperials had been savaging them in previous games.

The Terran light cruisers were based on a GURPs Interstellar Wars design (thus were missile-heavy and defenses light), and were then adjusted to fit into the MegTrav design sequence.

The two Terran squadrons each consisted of a single 9,000 dton cruiser, with two 5,000 dton light cruisers in support.

The Imperium enjoyed a Tech Level advantage of TL11 to the Terran TL10.  At these tech levels, there are no nuclear dampers nor meson guns. The primary weapons are the 100-ton nuclear missile bay for thumpage and the 100-ton particle accelerator bay for “detailed work”. Spinal mounts, of which none were represented, are all particle accelerators. 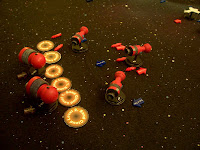 Turn 1 saw the Imperials enter at speed 4.  They were slowed down by their dreadnoughts, which have Maneuvre 2 drives (hurrah for TL 11).  The Terrans accelerated from speed 8 to speed 12(!).  Nukes were launched.

Turn 2: Began with a mis-communication amongst the Imperials, who pivoted in two opposing directions. Chalk it up to myself and Kenzie not having played much on the same side before. 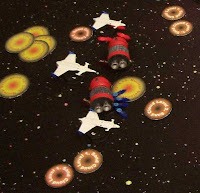 Turn 3: The Imperial cruisers attempted a breakthrough, accelerating to speeds 11 and 12. The lead cruiser was going to make a feigned run for the planet, while the trailing cruisers pivoted 180° to lend support to the distressed dreadnoughts.

The lead Imperial cruiser took a moderate thumping from missiles, and lost her fuel tanks (four sixes on the systems check).  She would be carried from the fighting by momentum.

DJ's ConFed squadron passed through the Imperial battleline, got on the other side of the DNs, and pivoted 180° to catch them a close range.

Turn 4: The Imperial cruiser with the shattered fuel tanks fired high-intensity missile vollies as it hurtled away.  DJ's cruisers were trading close-range shots with the Imperial DNs.  Two Terran CLs blew up, and then the unthinkable - an Imperial DN heeled over and exploded. 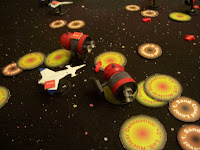 We called a marginal Terran victory, though we should have diced for initiative, for although the Imperial cruisers could have defeated Rob's remaining squadron, the DN firing would have finished off DJ's cruiser.  At the end of the day, the Imperials would probably not have had sufficient missile power to complete the bombardment.


New House Adjustments to the rules


Initiative defaults to an IGOUGO system.
When a side wins initiative, a single ship resolves fire and damage. Then the other side resolves a single ship’s fire and damage. This includes System Checks. Rinse and repeat. This prevents an entire squadron from getting wiped out by massed fire, at the expense of slowing down play a bit.  A chit is put down to show ships have fired for the turn.

Point Defense Fire against missiles affects an entire “attack”, not a single missile.  An attack is defined as a volley against a ship by another ship - hence, a single stick of 8 nuclear missiles have their attacks degraded by a single laser battery operating in point defense.  Note that if a single ship is firing two types of missiles, that is two “sticks” and the defender will need two PD laser batteries to affect both.  This is also in line with High Guard's mechanics, and allows some tactical flexibility in missile load-outs on the part of the aggressor.

This last also speeds up play a bit, as all the modifiers affect all the missiles in a stick, making throwing a handful of  eight-or-so dice at a time possible.

Communications is Key.
The botched pivot on turn 2 was a key factor in the disappointing Imperial showing. The idea was to concentrate on DJ's squadron, cripple it, and then continue advancing the cruiser elements on the planet.  My cruisers became detached from Kenzie’s DNs, and I was unable to lend him much-needed fire support –the result was the loss of two Dreadnoughts. My captain can look forward to leading a vanguard Forlorn Hope in the next big fleet action, you can rely on it.

The Terrans cannot Stand Off.
Terran Confederation ships tend to be lighter and faster than their Imperial counterparts, and must use their speed to offset Imperial firepower. This isn't easy in a vector-movement system.

In the previous playtest, the Terrans hung back and were being wiped out by the end of turn 2.  In addition to correcting some pointing errors on my part, I sent DJ over to the ConFed side for the replay, knowing he would off-set some of Rob's inherent caution. Pairing Rob (who sticks to the plan) with an aggressive player (who attacks to defend) made for a good showing on the Terran ConFed's part.