Creepy Hollow: The Wrath of the Headless Hessian

This past weekend saw Megz and yours truly at Cold Wars in Lancaster, PA. We ran a 7V/Witching Hour scenario featuring Ichabod Crane and the Headless Hessian, twice, both games were full, and both saw very different results.

Setup: Ichabod Crane and Katrina van Tassel are planning to search the Old Dutch Burying Ground for the Hessian's skull, to break the curse and end the haunting of Creepy Hollow. Lady van Tassel (aka The Witch) is going along to secretly thwart their plans. Abraham von Brunt has ridden to Mount Pleasant to raise a portion of the Westchester Militia.

The action takes place at night, with no moon. Safe movement is limited to a 6", with an attempted run adding 1d6". Shooting is limited to 12", with a -1 modifier for anything beyond short range.

If the Horseman had not been summoned by turn 6, he would automatically appear at the southern end of the road. The militia were timed to enter after the Hessian (roll turn or less on d6, once the Hessian appears).

We used the 7th Voyage event deck, with the 7TV 2E Finale countdown cards once the event cards ran out.

Friday's session was most amusing - the witch player decided to hang back and fight for the horseman's skull using her ghoul proxies. These were paid for prior to the game start, but placed in reserve, to be summoned once the witch was in the burying ground. Since the witch/Lady van Tassel had the Infiltrator skill, she could set up and move with our two Heroes (Ichabod and Katrina).

After the first turn, Lady van T peeled off and entered the graveyard through a gap in the wall, behind the crypt. She then summoned two ghouls and set them on Ichabod and Katrina, who were getting too close to the skull pile beneath the Tree of the Dead. 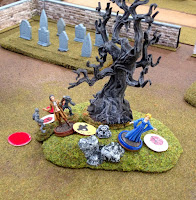 The ghouls themselves were unarmed, and only strong enough to stun, as was Katrina and Ichabod - the latter did have a flintlock pistol, but was a fairly poor shot.


There was a good deal of stuns inflicted, the heroes having an advantage as each hit point they had granted an additional d6 to roll off the stun. Still, they were kept busy enough, when Katrina suddenly snapped out of it, searched the skull pile, and raised up the Horseman's head. Lady van T. made her move...


Rushing the mound, Lady van T. stunned Katrina and took possession of the skull, only to be stunned in turn by Katrina. The skull dropped to the ground.

Immediately, the Horseman charged at the stunned witch, but fell short by 3/4 of an inch. Using an event card to seize the initiative, Lady van Tassel frantically searched the base of the skull pile for the missing cranium. Her first roll was a failure, and a hush fell on the game. Second roll...success! The players cheered, booed or shook their heads, depending on their allegiances. "Not me, you fool!" shrieked the Witch and indicating Ichabod and Katrina, "Kill THEM!". The Hessian complied, though with palpable reluctance,

At this point (turn 7) the Westchester Militia, Whitson's Section (so called because they were raised at Whitson's Tavern) rounded the graveyard gate and began to fire at the Horseman. Lady van T. made a hasty run for the back of the crypt, to jump the wall, with Abram von Brunt and a single militiaman in hot pursuit. Katrina, confronted the Hessian at the Tree of the Dead: "Foul dwimmerlaik..." well, you know the rest. Katrina played an event card - +1d6 to banish the Hessian. There was a flash of pyrotechnics, and both Hessian and nightmare steed were gone.

Next turn, von Brunt won initiative. "Halt, in the name of the great Jehovah and the incorporated village of Mount Pleasant!" he demanded, as the militiaman levelled his musket and bayonet. A couple of ghouls, looking awkwardly at the ground, shuffled away to their burrows. Lady van Tassel, grasping the inevitable, surrendered.

Van Brunt took 6 VPs - three for recovering the Hessians skull, two for capturing Lady van T., and one for showing up Ichabod and impressing Katrina, who took 2 points (for banishing the Hessian) and Ichabod only 1/2 VP for shooting a ghoul. 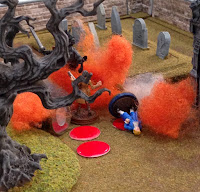 Lady van Tassel played a more straightforward game, sticking close to the group until they all strolled into the graveyard, then she raised a ghoul. Melee around the Tree until Turn 6, when the Hessian auto-appears. Katrina gains the skull, runs off the mound, is caught by the witch/Lady T. and killed (witch had a dagger!) but drops skull. Witch loses initiative as the Hessian charges, trailing hellfire. Hessian kills witch and von Brunt, while Ichabod is paralysed in fright.

The Hessian descends from his steed, picks up his fallen skull, places it on his head, and laughs horrifically. Ichabod flees for his life...roll credits.

This was indeed a fast-moving, merry scenario. Lots of laughs, stumbles, and gotchas - driven in no small part by the 7th Voyage event deck. Having the 7TV 2 ed. countdown cards also insured plenty of action in the last turn or two. I might tailor them slightly to reflect the more cinematic flavour of 7th Voyage.

At 5 Hit Points, the Headless Hessian is a six-legged, two armed engine of destruction. Works quite well as a semi-allied partner to the witch, as long as she holds the horseman's skull. Impressive how speedily the Horseman players turn on her, if she loses it.

I am thinking of adding Reverend Small to the Heroes side, also an additional militiaman and another ghoul for the witch to summon. I already have the models, so simple enough. Rev. Small would also have the ability to banish the Hessian, so there's a caveat.

We don't want to short change our best character...Ω 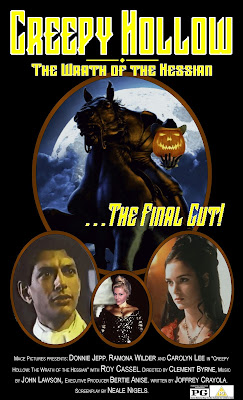 Final preparations for Cold Wars are underway - I'm dabbling with Gothic Horror this year. Ichabod Crane and Katrina van Tassel will be tangling with the Headless Hessian. Heads will roll...Ω