This is an interesting scenario taken from an article in JTAS by Prior, Bont & DeGraff*. It has been converted to Power Projection by me, and in so doing a small problem has cropped up, but more of that anon. (*Which, btw, sound like a great law firm. Or laser/lipo surgeons.)

This scenario is based on the Traveller future history of the Interstellar Wars (the same background that has my 15mm Terran ConFed pitted ‘gainst the 15mm Imperials, for those who are keeping track. Anyone? I thought not…)

As I was scheduled to run this at GZG-ECC last month, the various Terran polities were juggled to match up with the Tuffleyverse, but it must be said, the two universes dovetail nicely. (I had to leave the convention early, and never did have the chance to run this.)

In reprisal for a convoy of Imperial merchants ruthlessly shot up by the Terrans (specifically, the Anglo-American North Atlantic Confederation) the local Imperial governor has sent a punitive expedition to put the wreck on any Terran ships in the Barnard’s Star system. Nations represented include the Russo-Chinese ESU, the French-dominated FEU, and the south-German/Austrian NSL Also representing the Earth is a United Nations Space Agency flotilla of frigates and corvettes.

The NAC, as the party responsible for the shooting spree (this is what you get when you let Brits and Yanks run around space unsupervised) had to stand ready to take whatever the Vilani unleashed, while Europe and Rest of the World happily stood clear to let the Anglo-Americans take a Kick to The Nadlies. The UN squadron, funded by Yankee cash and staffed by Brit mercs also deployed with the NAC. 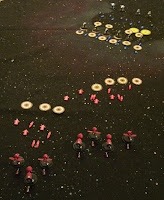 Turn One: saw the Imperials (played by Megz) make a wobbly acceleration towards the NAC/UN fleet. Megz was learning how to make a vector-based move, which, her being a girl, proved slightly easier than parallel parking. Slightly. The UN/NAC edged forward and loosed their first volley of missiles from the corvettes.

Turn Two: Missiles began to strike their targets (those nifty nuclear-green disks are nukes going up). Two imperial destroyers were damaged, one heavily. A stick of 5 missiles directed at the Imperial 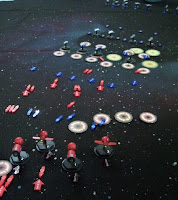 light cruiser either missed, were shot down or were blunted by the armour. A direct missile hit on one of the NAC corvettes caused a spontaneous hull breach and the corvette split longwise like a pea pod.
“Uh-oh.” Said the NAC commander, as another corvette lost power and tumbled towards the angry Vilani. 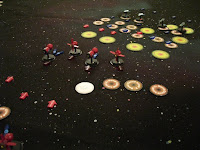 The remaining NAC/UN corvettes blew up real good. An imperial destroyer also went up. Another stick of six terran missiles converged on what was suspected to be the imperial flagship. They were mostly shot down. With four NAC/UN ships left (one or two with nicks/scrapes from the odd missile) facing an Imperial fleet with three light cruisers and three destroyers, the NAC/UN surrendered. No doubt the Imperials blew them out of space, but we were out of time.

Post-game Thoughts:
This is an odd scenario, as mentioned before, the problem is the Rest of World ships just hanging back, waiting to see what will happen between the NAC/UN and the Imperials. Somehow, I doubt that many gamers are willing to sit for two+ hours, waiting to get into a game. Since the Vilani can’t get all of their victory points by just chewing up the NAC/UN, they will eventually have to engage the Franco-Russo-Chinese-Swabians. My solution will be to break this into a two-session scenario, with the Imperials carrying over any damage/casualties, once they’ve thrashed the NAC/UN. 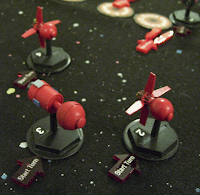 In the land of frigates, the light cruiser is king. Especially when armed with a royal particle accelerator bay. Any hits scored on the NAC/UN frigates were done by the CL PA’s. (At right, an Imperial light cruiser, with escorts, perfoming a Tokyo Drift. Smug bastards, aren't they?)

I was over-complicating the vector movement. This drove Megz crazy. Heh.

The NAC/UN should have accelerated away from the fight, and not surrendered. Vilani don’t often take prisoners – they foul their own berths, stink up the ship, and complain about the food. Easier to space them. As I mentioned, it was getting late on a Sunday and I was getting tired of making system checks to the sound of Megz and her victory dance. Oh, ohOHoh, OhohOH!

Another option would be to deploy the European Federal States with the NAC, as a gesture of western solidarity, and make the background state that the Euros fired on the merchants, which doesn’t seem likely, unless it was a Sarkozy government. Of course the NAC would stand with the EFS, because the NAC is stoopit, but there you have it.

The idea of the Rest of World, led by the UN, selling the Anglo-Americans out, would feel about right. Ω
Posted by kmfrye2001 at 8:16 AM 2 comments:

I think I’ve run this scenario four times, including a playtest. Each session plays differently. At Travellercon in 2008, the mercenaries barely escaped while the getting was good. At GZG-Con the mercs fairly waltzed off the board with their objective, after giving the miners a good stomping.

At Cold Wars, the miners decided to put the boot in.

There’s not much point in going through turn-sequence again: the scenario is set up to follow a certain course for the first two turns. Miners shoot Alpha Squad, Alpha shoots back, APC’s enter and then the fun begins. 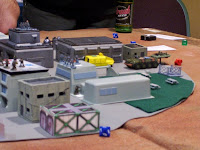 At Cold Wars, the mercs entered via the vehicle locks in the south and EAST – hey? That’s different. As a result, fighting actually spilled into Standpipe Park and the nearby Facilities Complex (combined Police/Fire/Emergency Services), which had not happened previously. 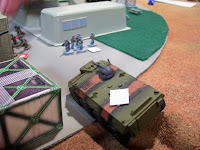 With fighting raging across the dome’s full southern hemisphere, the mercs were less able to mutually support their squads, while the miners had more effective units (the technicals and mining-bee) deploying against them . The mining-bee actually engaged an APC with its mining laser. It didn’t matter, the APC destroyed the ‘bee, but it took 2 turns and scared the knickers off the APC crew. 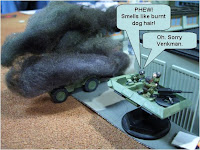 The miners also developed a new tactic – disable the vehicle airlocks. This was enacted by happenstance, as a desperate technical executed a bootlegger turn into the vehicle lock on east Avenue X to block it. An APC fired its support laser, destroying the technical, and the lock was now quite impassible (bet you wish you heard what the vehicle commander said to the gunner when they learned that the west lock was no longer an exit option). Rather like speaking in tongues, it was.

The miners also developed another use for technicals – hunting command air/rafts. Really, the only vehicle they could go toe-to-toe with was the air/raft so a single technical was tasked with bringing the mercenary command air/raft down. Both vehicles were armed with light machine guns, and after an interesting duel the technical had the better of the air/raft.

Suppressed and cut off, the air/raft landed and the miners were treated to the sight of SMS mercenary officers surrendering. “Do NOT shoot them” said the shop steward, “just kick their ass”. Ah, unions.

Capturing the mercenary commander essentially offset the loss of the data crystal for the miners, resulting in a draw, which really is a victory for the miners.

As a postscript: mention must be made of Kinsey’s Rowdies, the denizens of Kinsey’s Drunken Clambo pub at the corner of Ave.’s X and Y (We're Open All Nite). After two or so turns of building Dutch courage, the rowdies attacked the nearest merc squad, which had deployed in the street outside the pub. The ginned-up buggers fought bravely, but were soundly thrashed by the mercs. Limping back to the pub, their leader had a random though - maybe they should have tried shooting the mercs first?

We ran the old JTAS Amber Zone “Crystals from Dinom” at Ground Zero Games East Coast Convention XII, using 15mm StarGrunt II and a combination of GZG and RAFM miniatures (vehicles by DLD and Old Crow). Unfortunately, we were in a heavily-registered time slot (or else the ECC participants are getting tired of Traveller-themed games, or else it’s me) and our only pre-reg failed to show. Happily, it was myself and Megz, and we had a grand time playing together. 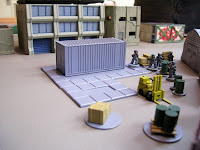 The scenario begins when a squad of SMS mercs (“SMS” for “Spinward Marches Solutions, LLC"), hired by Quadric Industries, has knocked-over an office full of rebellious miners in order to discover the location of an important consignment of jump crystals, which the miners have hidden. The office has been surrounded by the Dinom Workers Defense Committee (or some-such) and they are sniping at the mercs in alpha squad. 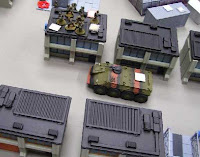 trundling to extract alpha squad, while navigating the airlocks and narrow streets of Medianne, the domed mining centre on the planet Dinom.

Unlike the previous time we played (at Travellercon-USA), the mercs were run by a single player (Megz) and were really able to concentrate on the task at hand: extracting alpha squad.

Turn one: the two squads of miners in the loading zone shot up alpha squad, which returned fire. The relief APCs entered the west and south vehicle locks.

Turn two: the APCs roll into Medianne. The Dinom Workers “boss” calls for a tracked vehicle with mining laser to counter. More alpha squad go down.

Turn three: SMS squad beta deploys to a house overlooking the loading zone, where the Dinom Worker’s forces have been sniping on alpha. SMS squad gamma holds tight as their APC cuts round a corner and comes at the worker’s in the loading area from an opposite angle. The workers are bracketed.

As the laser mining vehicle rounds the corner of X and Y, an APC 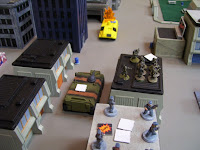 covering the intersection with its light plasma gun blasts it. The mining vehicle is disabled.

Turn Four: One surviving worker from the mining vehicle stumbles into the pub at the corner of X and Y and riles up the collection of drinkers to defend their dome. Five stumble-bums rush next door to brawl with what’s left of alpha squad. Alpha squad stands fast and repels the attack after two tense rounds of close combat. The rowdies leave their wounded and return to the pub. 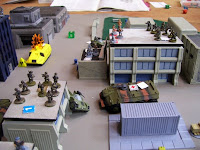 Turn Five: Squad Gamma exits their APC and collects the survivors from Squad Alpha. The workers have brought in two police “technicals”: pickup trucks with .50 caliber machine guns attached. The APCs dispatch one while the other fires ineffectively at alpha and gamma squads.

Turn Six: APC #2, carrying what’s left of alpha squad (3 or so mercs with wounded) and a detachment of gamma squad heads for the vehicle lock at the north end of Avenue Y. The remaining technical pursues and avoids a plasma shot from APC#1, which is still covering the intersection of X and Y. The technical gunner fires, hoping to knock out the drives of APC #2, but the fire is ineffective. 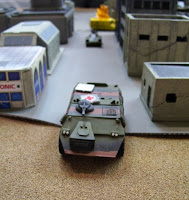 The APC exits on the next turn.

The mercenaries are successful. The jump crystals will flow, at least for now.

StarGrunt II plays best at the level of three or four squads per side. I’ve seen (and run) games with each player moving a platoon, and it just seems much too slow as a result. For games larger than a few squads, another system, like Striker II, moves faster (and despite its problems, is better suited). Ω
Posted by kmfrye2001 at 6:35 AM 9 comments: