Some of the chaps over at the Science Fiction and Fantasy Wargames Society were discussing Star Wars Fleet wargaming, so I decided to put my oar (or twin ion engines) in.

These may well be my oldest photos yet - from 2001 - so I apologise for the quality. Once I get the chance, I'll take new photies and replace them here.

These minis were either conversions from existing Galoob Micro Machines/Action Fleet or else heavily kit-bashed.

Below are two Imperial Serpent-class cruisers.  These are mostly milliput with some bits from Starblazers miniatures for the bridge.  Abaft starboard is an Interdictor Cruisers - notice the balls. 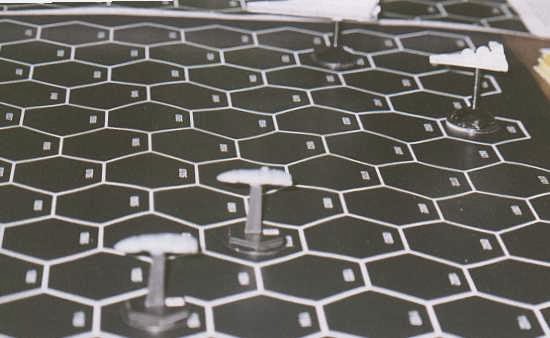 Below are two Imperial Nebulon Frigates.  These were kit-bashed from two of GDW's Sky Galleons of Mars plastic ships - maybe an End-Runner?  Various sections of plastic pipette, coffee stirrers and cocktail sticks were used, along with a healthy dose of Milliput.  The three little corvettes in the lower right hand corner were cut from the hanger of the die-cast metal Imperial SD.

Below, the two frigates are escorting a die-cast metal Imperial-class Star Destroyer and a slightly smaller Galoob plastic Victory-class Star Destroyer. The Interdictor cruiser can be seen at the top left.  This is a nice picture for showing the relevant size. The hex-grid is (IIRC) 1.5 inch. 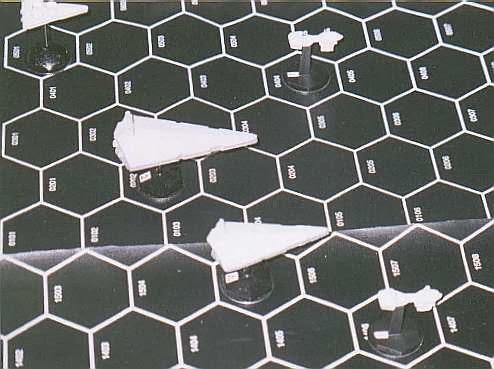 Finally, the Rebel scum. All are from the Galoob Micro-Machine/Action Fleet line. The small MC40s were simply cut-down versions of the MC80.  I think the ship on the extreme left was a  Star Blazers figure, drafted as a Dreadnaught. 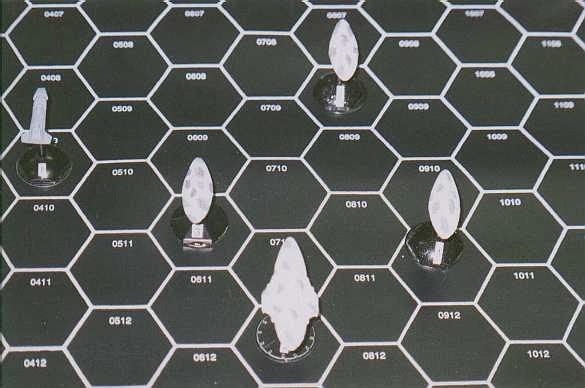 These were fun to make, in the days when I had a lot of free time.  The scale was dictated by the availability of the Mon Cal ships, as I had no intention of scratch building both sides.  Somewhere, I have the Super Star Destroyer "Executor" as a kit, which I have yet to build. Ah, someday....Ω
Posted by kmfrye2001 at 9:13 AM No comments: