The alternate title "Down in the Dumpster" was rejected a touch too trite and a bit tropey much.


Modern urban scenery in the 25/28mm scale can be quite the challenge to locate, especially when one has determined to build a flashback to Philadelphia in the 1970s.  Did plastic trash bags exist in 1973? (apparently, yes. My old dad used to use paper shopping bags by economic choice, and those old TV averts - showing the soggy bottom falling through - bring back real childhood memories.)

What about dumpsters/skips? I remember my father taking me to one, in the mid-70's that was enormous, probably about 20', but to an eight year old, it looked like the whale what swallowed Pinnochio. It was painted red, had some steps to a metal platform, with rail guards. This was not some public dispose-all, this was on a gated site, where Dad knew the security staff.

Dad had some boxes of shredded paper he wanted disposed of...I know, that sounds a bit shady, but I think he was just blessed with a surfeit of caution...shady caution.

Anyway, my dad had me stand at the base of the steps, where the "start/stop" buttons were, while he cast in the box and indicated I should press "start". As I did, I ran up the steps, to see the great. steel piston slowly extend and press the box, crush the box, into the dark depths of Pinnochio's whale.

Unfortunately, in hindsight, I'm realising that was a compactor not a dumpster, and was probably from a customised shipping container with the engine, piston and platform purpose-built and added on. I haven't been able to find one in 28mm, or indeed ANY scale.

Which leads me back to skips/dumpsters. 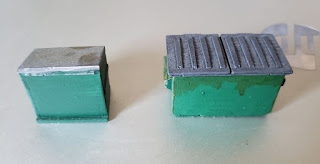 The larger dumpster/skip is from Studio Miniatures. The smaller came out of a model train set. I'll need to find the manufacturer's name, becuase I like it better and would like to find more...Ω
Posted by kmfrye2001 at 1:30 PM No comments: