After Cold Wars, I decided to dress up my 7TV/Doctor Who game map with a mat, designed to simulate the concrete surfacing of an old WWII air base.

Sadly, my normal source - Hotz Mats - has been developing a less-than-stellar reputation at The Miniatures Page, so I cast my browser about and stumbled upon Mats by Mars.

Their website seems well done, and the prices were reasonable, so I ordered a 36" x 36" light Koncrete-pattern, and was well pleased by the result. 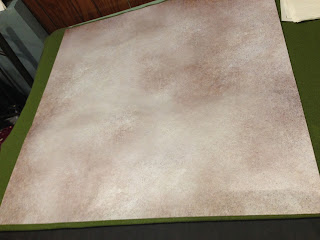 The new mat arrived in less than two weeks, preceded by a shipping notification, and rolled up in a sturdy tube, which included a "care and feeding" sheet explaining what NOT to do to my new mat. I thought this was very considerate.  Also, the colour was very pleasant and complimented my airbase nicely.

Doctor Who and the Mist from Mars


This past Cold Wars, in Lancaster, PA, saw Megz and I run a 7TV 1st ed. game: "Doctor Who and the Mist from Mars", adapted from the Rogues Gallery programme guide by Crooked Dice.

We ran two sessions, Friday and Saturday, in the 1:00 PM time slot. One of the advantages of running at a convention is we usually have a full game, and this year was no exception.

Three weeks had elapsed since the initial playtest and the convention, and I was able to complete the barracks and medical hut, paint the crates, paint the Third Doctor in his plaid/tweed cape, and add additional forces for both sides. 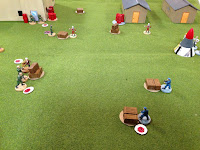 For an additional UNIT player, I added Sgt. Benton and a Heavy Weapons Team (HMG), in a Landrover.

For the additional Mist player, I added three guards  - unfortunate RAF airmen, who have since been assimilated by the Mist. I also added Captain Gray, a human victim/servitor of the Mist who has retained her personality but has gone over to the dark side. The character is reminiscent of Captain Black, agent of the Mysterons, which I like very much.


An amusing game to referee. Megz has come along quite well as a ref, and was able to run the game herself, with me relegated to fetching the tea and the occasional rules interpretation. Good stuff...Ω