This week's Friday Pal's Night featured a Doctor Who battle which took a fatalistic turn - our boy Eljay was controlling the Earth Federation crew when he found himself surrounded, with a primed self-destruct mechanism, and being rapidly cut down by Dalek forces. 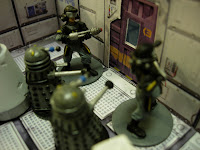 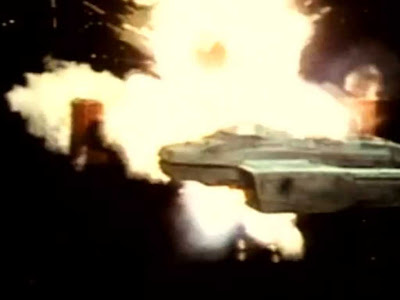 This brought the game to a surprising and rather abrupt end. Several of the other players were a bit put out, as the Loyalist Daleks were making great progress and had the Doctor and his faction fleeing before them.

Davros had just exterminated the last of the Movellans. We were looking forward to the great Dalek vs. Davros faction fight.

And then Eljay found the jolly, candy-like button and decided on "Boom Today".

I will have to add a scenario rule that the Earth crew must make a morale check before terminating the station and all onboard it.


The big surprise was the effect 50+ doors have on a firefight. Players would position their figures to open a door, blast away with the rest of the faction, and use another figure to close the door at the end of their activation - cutting off the line-of-sight.  We'll be adopting a rule that a doorway must remain either open or closed for an entire turn.

And we're resolved to keep Eljay away from the Scenario-Eraser button. Ω

As previously mentioned, I’ve been painting up 28mm Doctor Who miniatures and having quite a bit of fun with them.

Back in July, I ran a scenario based on the 1984 Doctor Who episode “Resurrection of the Daleks”, where the Daleks rescue their creator, Davros, from an Earth Federation prison-station so that he can help them develop a defence for an anti-Dalek bio-weapon, developed by their android opponents, the Movellans.

There were four players, including me (not an optimal solution, as I’m needed to referee all of the little “gotchas” that litter the scenario like so many discarded pop bottles) so I had to “NPC” the Earth Federation and the Loyalist Daleks. This was accomplished by playing both factions very straight in their actions and motivations – the Daleks want to capture Davros and the Federation wants to keep him; the rest of the factions must act around these drivers.

I gave the Davros Faction to "Inferno" Mark, who hadn’t watched the TV show, calculating that this faction was the easiest to game with fairly straightforward motivations (survive). I might have erred slightly in this judgment, as the other factions proceeded to dogpile him, though frankly, if you grew up glued to the TV and NEVER watched Doctor Who, you deserve whatever you get.

Two of the other players were familiar with the Doctor Who TV programme: to the evil Dr. Goldwyrm (Mike L.) I gave the Movellan Hottie Hit Squad.. These are the spoiler faction, and he used them to great effect, all events considered.

To Rich J. (of Rattrap Games) I gave the Doctor Faction, being fairly confidant that Rich would do the Doctor justice, and he did not disappoint.

We were using Graeme Dawson’s Doctor Who Miniature Rules. These are fast playing and use simple ID cards, removing the need for rosters. Most figures are eliminated if they take a wound (hi-tech Zap-O-Tronic rays) with a few of the tougher models taking two or even three hits to eliminate.


Another neat rule in Graeme’s set is the ability of certain models (Davros, the Doctor, scientists) to “invent” a weapon to use against their foes. This might result in a +1 to hit the enemy or a weapon proficient at wiping out an opposing side’s ordinary, jobbing warriors. This creates a sense of urgency when an opposing side is inventing, and you begin to understand just WHY the Daleks soil their trollies when the Doctor looks at them cross-eyed.

The game itself played well – Davros was immediately put on the spot when the Movellans raced toward his laboratory and the Loyalist Daleks trundled (slowly) in the same direction; attacking the station’s control room in the process.

The Doctor’s faction left the area of the TARDIS and beat the Dalek Troopers to the control room. The Doctor convinced the Earth Federation crew that he was there to help, and a stunningly high roll didn’t hurt either. 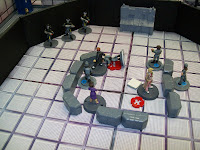 While the crew hunkered down behind the control consoles, Dalek Troopers rushed the control room. In the general firefight, a Dalek trooper and a crewman went down. The Doctor took cover, and that is when the Dalek agent, Stien, who had been traveling with the Doctor, decided to break his cover and capture the Doctor (Cue cliffhanger end theme)...

Meanwhile, the Movellans had been squaring off with two of Davros’ daleks. The Davros player was suitably impressed when a Movellam shugged off a Dalek gunstick blast (not often seen, you know). The Movellan leader, Agella, lobbed a dose of Mad Dalek Disease but the Dalek resisted and moved away from the blast area. A second Dalek was dispatched to deal with the Movellans, and was able to drop both of the sexy androids.

This triggered a Movellan morale test, as they had just taken 50% casualties. Nothing beats a badly rolled die, and the two surviving Movellans, having failed the test, had to withdraw their spandex-clad bottoms to the transmat. 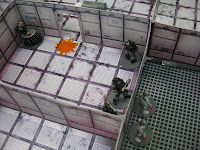 However, hope springs eternal in the cold, black heart of Dr. Goldwyrm, and he was able to “retreat” past the boot cupboard where Davros was hiding. Dropping the last virus grenade at the base of Davros’ wheelie-bin, they gave the traditional Movellan farewell (“Toodles!”) and fled toward the transmat.

Once again, Fate just can’t stand disco androids - Davros was able to make his saving roll and back away from the virus grenade blast radius, pinning him against the wall.
In the Control Room, the Dalek Troopers were battling against the crew while Sgt. Stien attacked the Doctor, who was able to fend off the attack using his sonic screwdriver. Stien was naturally caught off guard that the Davison Doctor was using his Sonic Screwdriver, since it was absent from the series between The Visitation and the TV Movie. This confusion in Stien’s mind was critical in breaking the Dalek Mind Conditioning (Thank you, Rev. Nice of FROTHERS…)

As Stien fought against the confusion in his mind, the main Dalek assault force with Commander Lytton burst into the Control Room. By now, the Doctor was coordinating with the Earth Federation crew and adding Turlough and Stien to the mix, was able to mount a serious defence of the control room. A Loyalist Dalek blew up, causing a morale check on the Dalek side.

The Loyalist Daleks withdrew, allowing the Doctor and Federation factions to concentrate on recapturing Davros. The companion Tegan was sent forward to add an extra activation at the right moment - certain feminine companions may “scream” which, if successful, allows a nearby friendly figure an additional activation, even if the figure has already moved. This is a handy quality and gives the Doctor’s side an added degree of unpredictability.


With the station crew supporting him, the Doctor was able to cause the Davros Dalek Troopers to fail morale, and using the Doctor’s intrinsic extra activation, was able to burst into Davros’ boot cupboard and capture the evil genius. I ruled the Doctor/Earth Federation had won, with Davros scoring a minor victory (survival, albeit still incarcerated) with a Dalek and Movellan loss. Good dramatic stuff that – the ratings bean-counters will be pleased.

I really like the Graeme Dawson rules. The entire game was fought to a satisfactory conclusion in about 2 hours. I do like a game that plays quickly, and Graeme’s rules deliver.
Play can be further sped up using initiative cards, just five will cover all the factions. Excellent idea, and thank you Dr. Goldwyrm.

Each faction should have a “unique” figure/model, to mitigate the dreaded “wiped out” morale check that occurs when a faction reaches 50% casualties. This keeps everyone in the fight and promotes further dramatic action as the sole faction survivor stumbles towards the self-destruct switch.

We'll be trying this scenario again eventually. It will be interesting to see how these small tweaks affect the overall scenario. Ω
Posted by kmfrye2001 at 12:56 PM No comments: