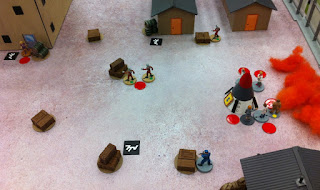 NJCon was held on 8 - 9 June, 2018 at the NJ Expo Center in Edison, NJ.  Attendance was good and certainly seems to be increasing in this, the convention's 10th year.
Two 7TV/Doctor Who games were scheduled - the first failed to launch as 1:00 PM Friday is still a bit early for walk ups, but the 6:00 PM slot had four participants - two, John and James, from previous games.
The new improved board looked a treat - mat by Mats by Mars and security fence (double set) by Crossover Miniatures.

The Mist from Mars game started along familiar lines - UNIT, Mike Yates and the Doctor were trying to foil the plans of the three Servitors of the Mist and enslaved scientists. A team of possessed RAF airmen under Capt. Gray were assisting the Mist, while Sgt. Benton and a Landrover full of machine gun were supporting UNIT.

UNIT and Aliens advanced, while the scientists proceeded to build The Deadly Plot Device, and the Doctor nipped into the nearest lab to do likewise.

The "Longstanding Grudge" card turned up again, and true to tradition, it was assigned to Captains Gray and Mike "That's no Alien, that's my ex-wife" Yates. This meant they would get to re-roll failed hits against each other - "Hell hath no fury" and all that...

Events started to pick up on Turn 2, when Sgt. Benton and his HMG Team arrived via Landrover. Benton conducted a bootlegger turn at the gate and backed into the compound, before going all "Russkie Teaparty" and spraying the Servitors of the Mist with .50 Cal hors d'oeuvres.

The Junior Servitor advance on Capt. Yates and stunned him with a blast of energy, before shortly thereafter going down in a hail of NATO lead.

Captain Gray continued to follow Yates, complaining about missed alimony payments, unreturned phone calls, and generally causing a -1 to all of Yates rolls, due to distraction.  Since the figure hadn't done anything overtly hostile (and nothing a married gamer isn't used to), the UNIT side couldn't shoot at her.

This detente would soon end, as sometime around Turn 4, Capt. Gray charged the Landrover, punched, stunned and pulled Benton from the driver's seat, and, jumping in, proceeded to drive away, with a startled HMG team in the back. (This actually occurred over two turns, the Mist side got lucky and won initiative twice in a row. Hilarious.)

Driving and weaving like a Bombay Taxi, Capt Gray tried to throw the HMG team from the Landrover. Impressively, they were able to make their Agility checks, twice (with the help of the Audience Appreciation chits) and clung on for dear life (possibly they have family from Mumbai?).
The joyride ended when Capt Gray lost control and hit the security fence. Did she survive?
Tune in next time...


Almost as an afterthought, the Doctor reappeared, having discovered a weakness in the Servitors life supports (+1 melee against a Servitor). The scientists countered, and the game ended.

UNIT/Doctor had scored the most points, with Benton and Gray tied for second, with the main Servitors being wiped out.

Post Game Thoughts: Not many. Game still seems tilted in favour of UNIT/The Doctor. I might just give Capt. Gray leadership 1 for future games and have done with it. James, the player who controlled Gray, received post-game points for using her aggressively....Ω

7TV - Doctor Who and the Mist from Mars


Preparing for NJ-Con. We noticed that players can't always spot the game in a large hall, so Megz whipped up a sign placard from elements I grabbed from the web, including art by Andrew Lambert (the three astronauts), an image of Jon Pertwee, and the 7TV logo (adjusted to 1st Ed.)