For Confederation and Cause!

A quick dig through the storage boxes resulted in these ready-made grav tanks; mothballed since 2004 and awaiting the Call to defend the Solomani Cause.

They were originally intended as Imperial light scout tanks, but as Jon at GZG has released some models which are much more like those depicted in Traveller, these will now be pressed into the service of the ConFed.


These are a kitbash, using the long OOP DLD 15mm Civet hull. Back in the day, I had purchased three, which is just enough for a light platoon of scout tanks.  I might be able to stretch that to two platoons by adding some air/rafts with observers and some infantry in cavalry APCs. 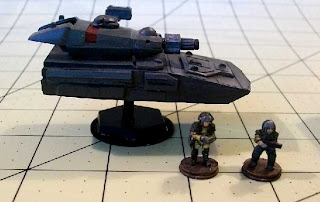 The turret is from John McEwan's Reviresco Starguard line -  part of the Devil Cat Light Tank kit.  Though Starguard is closer to 20mm scale, the big turret fits well to the modern 15mm hull. 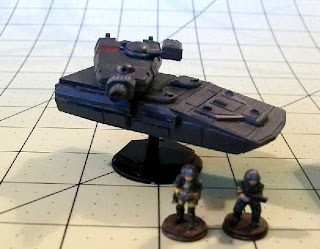 The main gun is from the Starseige Rebellion Imperial weapons pack - I think it was designed for some Gundam-style mobile suit. The box off the side of the cupola is a mini-missile launcher.

These models will do fine as GRPZ-IV's - a light grav tank used in the recon companies of the ConFederation Assault Brigades.

All that's left to do is to detail the tanks with Solomani markings and possibly add some dry-brushing, as my tastes have changed a bit in the near-decade that's passed since I first finished them.

I've just seen the new 15mm release from Rebel Minis and I'm newly inspired to paint up a batch of Solomani Confederation troops to tussle with my (Third) Imperials.


These little beauties are strongly reminiscent of those illustrated by Blair Reynolds in the DGP Solomani and Aslan book - and I think he captured the look of a parallel development, compared to the 3I, while maintaining an esthetic distinction.


About ten years ago, when getting into 15mm sci-fi (thanks to Jon Tuffley and GZG-Con) I began to build elements of my ConFed army - vehicles were easiest, especially grav tanks and grav sleds - but finding ground troops with the right animus was difficult.  Rebel Minis has resolved this issue for me...Ω