The Loor'rik'k'ring'r!kir translates to "Carry the platoon to make death" and is the standard design for the armed forces of the Two Thousand Worlds.  According to GURPS Traveller Alien Races 2, this brute is enormous - 100 feet across and 15 feet tall. Green and Trained troops might require a morale roll as it hovers, Independence Day-style, over the battlefield.

Of course, experienced troops, like the Imperials, Solomani and Ithklur, understand that a large target is an easy target, and refer to this family of vehicles as Flying Dart Boards. 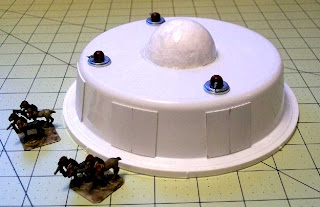 I modeled mine from a Chinese take-away container - curried chicken IIRC. The sensor dome was half a styrofoam Xmas ornament blank. There are three VRF gauss guns in remote turrets (K'Kree can't tolerate being cramped into a gunnery turret) and five forward deployment ramps, with an emergency ramp aft.  K'Kree like to charge into battle, following the leader. 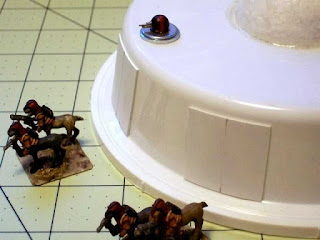 The VRF gauss guns were made from small wooden beads, mounted in washers, with muzzles from the bitz box glued on. Some Martian Metals K'Kree military are shown for scale - even at the size of a moderate garage door, K'Kree will need to mind their heads while exiting.

I'll have pictures of the primed and painted version up shortly...Ω
Posted by kmfrye2001 at 3:52 PM 2 comments: