As has been mentioned previously, NJ Con in Edison NJ is a great convention.  I ran two StarGrunt scenarios, both of which were designed for TravellerCon-USA.

Full write-ups of these can be found here and here - however, I'll post some recent pictures from NJ Con to keep current.

Crystals from Dinom - I had one player, John R, which is all the game needs if I take the opposing side. John did a fine job of getting the pinned-down mercs off the board.  I think it took him four turns, which is some kind of record.

John caught one of my squads in the middle of the street, shot them up with vehicle-mounted lasers, and proceeded to over run them.


On Saturday, I was pleased to have John return for "Canned Vland". Once again, he had choice of sides whilst I would run opposite. He chose the Planetary Defense platoon and supporting ConFederation Marines.  I would run the Vilani.

Going by The Book, I sent my recon sleds forward, hoping to draw some anti-tank rocket fire, but John was not to be gulled, and as the recon went deeper, the armour had to follow. 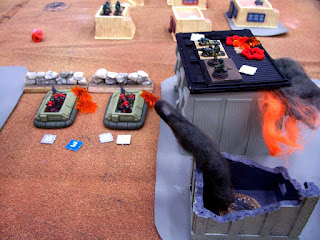 Once at the barricades, the fire from the PDF intensified, pinning down the Imperial recon - John decided he could spare a few LAW rounds, and one hover scout went boom.  I think some of the crew got out, and you can see them sheltering in one of the nearby burning buildings.  Idiots. 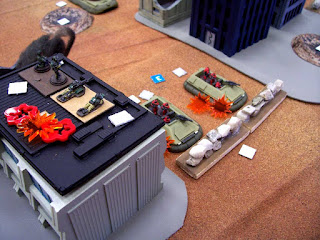 As the plasma main guns of the tanks fired in support of the recon unit, building caught fire and the PDF SWAT team lost half it's numbers.

Finally, around turn 4, the first tank crossed the barrier, and the missiles began to fly in earnest. Fortunately (for my side - hurrah!) John had some pretty mediocre rolls, and couldn't score a major hit.  He logged enough minor hits to disable the lead tanks plenum chamber (or Bernoulli drive, or whatever) and the crew de-bussed in a panic and took shelter in a nearby burning building.  Idiots. 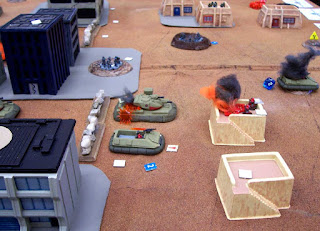 Buy the end of turn 5, it was obvious the Vilani would be unable to get their three remaining vehicles (2 tanks and a recon sled) off the enemy side in time (end of turn six).  The Terrans were declared the winners. Well done!

Post Convention Thoughts
Both games played well - a single player has a certain advantage vs a team, in that his moves are well coordinated. He loses something of a broader perspective, but in a skirmish game, focus is sometimes better.

In both games, we played to a clear result in just over two hours - a fast moving game is ALWAYS better.

By the way, if the reader noticed the barricades were different in this game, you win a cookie. I wasn't able to find the corner stock berms from previous games, so I used my Northwest Frontier sangars from my 25mm Colonial collection. These were made back in the late eighties using ornamental pebbles and craft glue, and they have served honourably ever since...Ω
Posted by kmfrye2001 at 8:07 AM 5 comments:

NJ Con - This IS Your Daddy's Miniature Convention

There are people who like large, noisy, sweaty, smelly conventions -
I am not one of them.

And that's why I like NJ Con in Edison, NJ, where I've just spent two relaxing, enjoyable days. Plenty of parking, nice helpful staff, modest but interesting dealers room, and past time with good company. Nice convention site with room to grow.

NJ Con recaptures the simple fun of playing miniatures as was done in the Golden Age - there's really No School like Old School.

The NJ Expo Center is located at the end of a quiet business park, near the nexus of three major highways (NJ Turnpike, Garden State Parkway and I-287), making it easily accessible for drives from north, west and south.

Minor downside - the convention center is about 1/2 a mile from the nearest hotel.  That's not much of a problem in my opinion. Another debatable downside is there was no integral catering, but there was a BBQ van with some very good hot sandwiches which was there from about 3:00 PM to about 8:00 PM.  And being Edison there are plenty of restaurants, some of which will not be Indian.

For a touch of controversy, I understand there are those in HMGS who have dubbed NJ Con the "Anti-Historicon" - I find this difficult to credit.  The first NJ Con was run at Fort Dix in 2008 - well before the current Historicon move and unfortunate fallout.  With a full month (and attendant pay-cycles) between event dates NJ Con is not in direct competition with H-Con - it is, at best, a soft or indirect competitor.

That said, the success and inevitable growth of NJ Con does prove that there is life outside of HMGS for the miniature wargame hobby - something which the current HMGS leadership might not want to hear....Ω
Posted by kmfrye2001 at 9:19 AM 6 comments: