What Have I Been Up To?

Regular readers may have noticed another long absence, well, I'm back, and I'll share (guiltily) what I've been up to...

There's been quite the gap in posts lately, and it's entirely my fault - we haven't been able to link up with my friday group, and I've only been to one Mid-Week Wargame Wampage since January.

Not that I haven't been gaming - but, dirty secret, it's been online. After some 15 years of being online, I finally found my first MMORPG, and Megz has been sharing the madness.

For the stone-knives-and-bearskins fans amongst the readers, that acronym stand for Massively Multiplayer Online Role Play Game, and in this case, it's Star Trek Online (hereafter STO).


Yes, space-cadets, it's now possible to boldy split an infinitive, where no on has split, before  - online. STO is a combination of the Sims 2 meets FASA'a Star Trek Combat Simulator, all in the universe of Gene Roddenberry's Star Trek.

Players may select Federation, Klingon or Romulan as their character.  There's also an "alien" sub division, which is allied to either Fed or Klingon. Also, the Romulans aren't exactly a full faction (locals call them a "fraction") since Cryptic Studios decided it would be easier to ally the higher ranked Romulan characters to either the Federation or Klingon Empire (to be clear, I think this was a bad, sloppy, lazy decision...)


Your character progresses from a Cadet to a Fleet Admiral, over the course of play. Lower level missions are more reminiscent of the TV series - there are some negotiation missions, search party missions, patrol missions and such like.

That said, most missions, either ground-based or in space, are combat oriented. As you character gains rank and prestige, new venues will open: there's the planet Nukara - hot as hell where an environmental suit is all standing between you and fiery doom.  There is New Romulus, where the refugees from the Hobus Supernova are rebuilding their home.  There is Defera, which is being invaded by the Borg. There is Kobali Prime, under invasion from the Vaadwaur, and harbouring an unpleasant secret.

In addition to these "Adventure Zones" there are the canon worlds of Vulcan and Andoria (which seem to have been forgotten by the developers at Cryptic) and Risa, the Resort World, where the Galaxy Relaxes (for a short time during the summer).

This game is not without its drawbacks - the social element is a trifle...awkward. If you thought miniature gamers had genetic social handicaps, just have a read thru a MMORG's user forum: after following a few threads, you might think you were reading an HMGS "Lets Move/Not Move Historicon Thread".

That said, there are some delightful people playing Online, with the advantage of being able to meet ad hoc, and with no boxes of miniatures, terrain, dice, measuring tapes to cart about. Players organise themselves into fleets, the STO equivalent of World of Warcraft guilds.  Fleets can be helpful resources, providing access to rare equipment and supplies, or they can be barren monuments to their founder's vanity.  Megz and I have been in both kinds.

Other hitches include a lack of Quality Control in the programming department - there are harmless bugs that are so old ("Talk to Loot Critter" springs to mind) that the current programmers seem to have no idea how to fix them. These aren't glaringly bad, but they serve as a pointer to a deeper issue...

Probably the greatest drawback - which some might label a "feature" - is how much TIME this game will burn. Many tasks have a 20-hour cycle (or "cool down") which encourages the player to log in daily.  At the higher levels, assigning Duty Officers, R &D, plus supporting the various "fronts" (Borg front, Tholian front, New Romulus, etc) can easily add up to an hour, and more if one wishes to play some tactical encounters.  Include making friends (most of the other characters are players - especially the ones running and jumping about like idiots) and one could easily spend four hours and up online.  It's happened to me.

After six months, the obsession is passing, and I find myself able to go back to working on miniatures, or work, or watch the news (bleah!) without wondering if that Level XIII Anti-proton bank my engineers are working on is finished...think I'll log in for a minute... 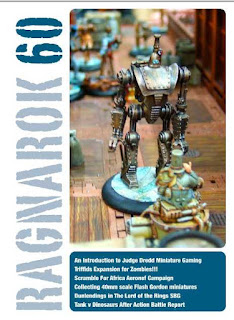 The latest (and that's literally) issue of Ragnarok is now available as a pdf download.

Health issues on the part of the SFSWS secretary, Mike T, has delayed release by a year - I sincerely hope Mike is on the mend and enjoys a full recovery.

There are articles on gaming Judge Dredd, Battlestar Galactica, Doctor Who and one for adding Triffids to your zombie games (I want an Eddie Izzard miniature...bang me gavel!)

Also, the full rules, stat cards and maps for the Stargunt II version of "Crystals from Dinom" written by yr. humble bloggist and included with Marc Miller's blessing!