As an end-of-year experiment, Megz and I engaged in a friendly game of 5150 Star Navy, by Two Hour Wargames.  We used my old collection of FASA and Starline ships from the Star Trek franchise.

Our old rules of choice were FASA's Starship Combat Simulator, with detailed SSD's and lots of damage rolls and adjustments for loss of power and superstructure, and while not as slow as Star Fleet Battles, a fleet-sized game could take about four our so hours.. I've been hankering to try the 5150 rules out, as they have been reported on The Miniatures Page as being fast and fun.

The rules themselves are available as a pdf, and are some 65 pages long, plus an index.  For our purposes, we can draw on the supplied races from the 5150 universe and adapt them to Star trek.  The Star Navy would form the template for the Federation, and the Hishen would provide the guideline for the Klingons.


The Klingon squadron was comprised of two D7-A Battlecruisers (IKVs Klothos and Tantarth - as seen in the original series and animated series) led by a D7-M (IKV K'Tinga) as seen in The Motion Picture. 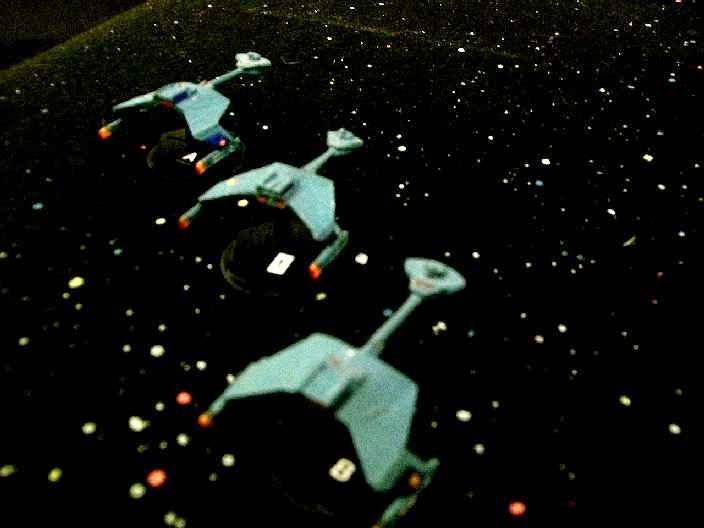 Pregame and Turn 1: 5150 Star Navy has some interesting pregame scouting rules, which will affect set-up and deployment. It was determined that, while the Federation were defending the system, they had managed to jump the Klingon infiltrators. The Klingons rolled badly, and as a result, the Federation would be coming in to their forward port flank.

All ships were REP 4 (standard naval) except the cruiser Exeter, which had a TV crew aboard, and rated a REP of 5) .

The Feds came in at speed 6 (max for the cruiser) and one of their destroyers damaged D7(B)'s shields. The Klingons panicked and targeted the destroyer, bringing down her shields and damaging her hull.  Our first table rule was enacted, we halved the damage larger ships do to smaller ones.

Turn 2-3. The Feds targeted the D7-M, as she had extra guns and a photon torpedo tube.  Three ships on one - she blew up real good. 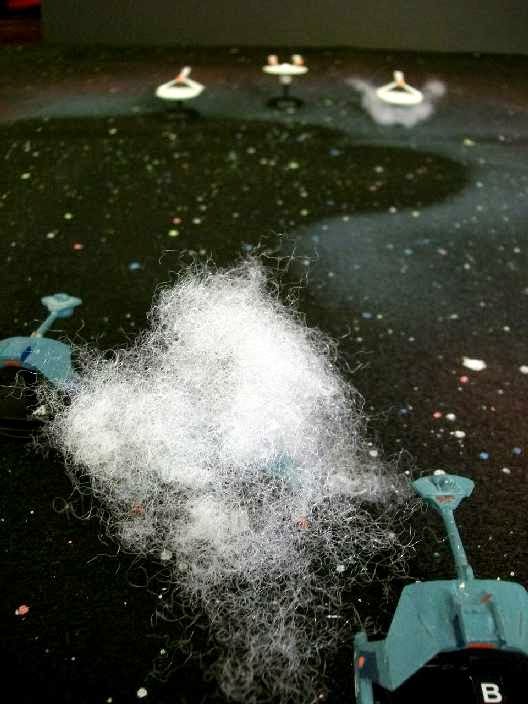 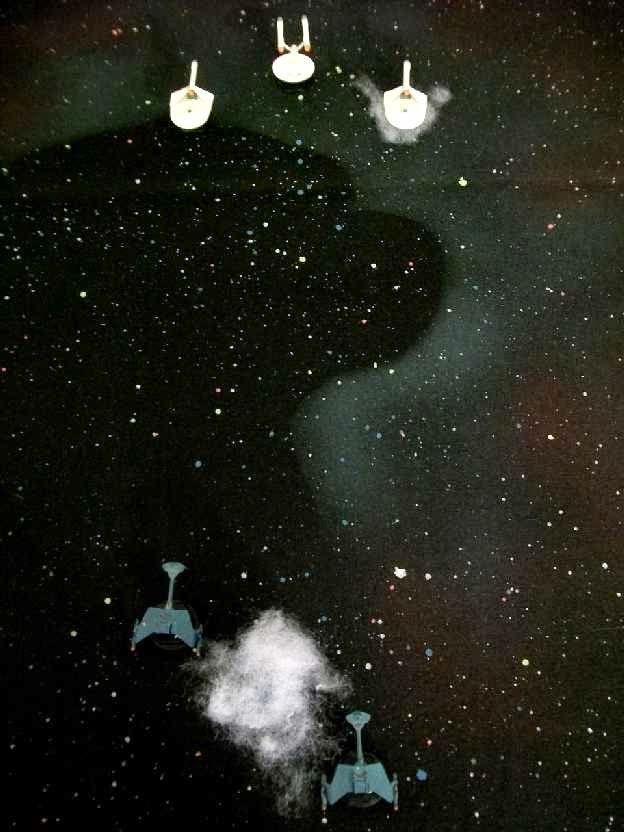 Turn 5 - 6. An attempt to avenge their commander, the surviving D7s took out both destroyers.  Then attempted to accelerate past the Exeter and exploit her weak rear arc. 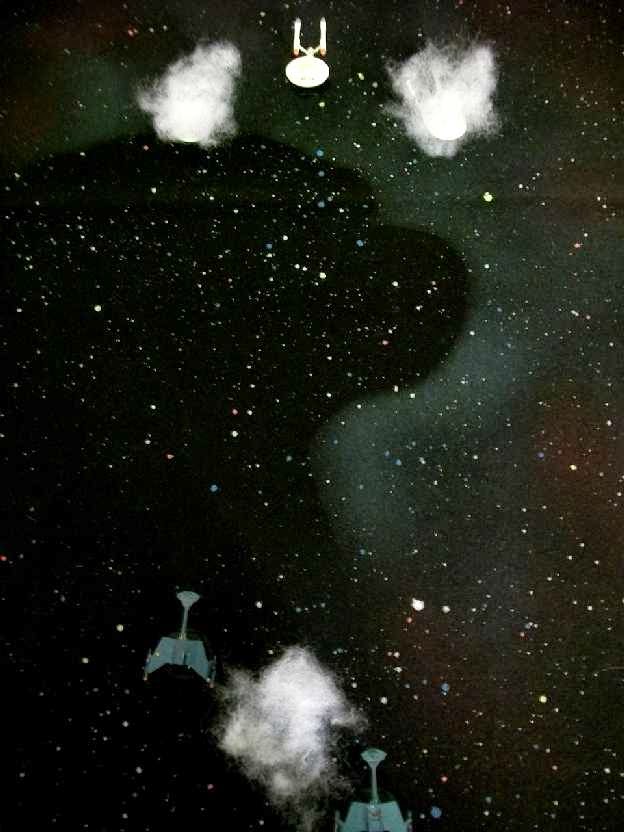 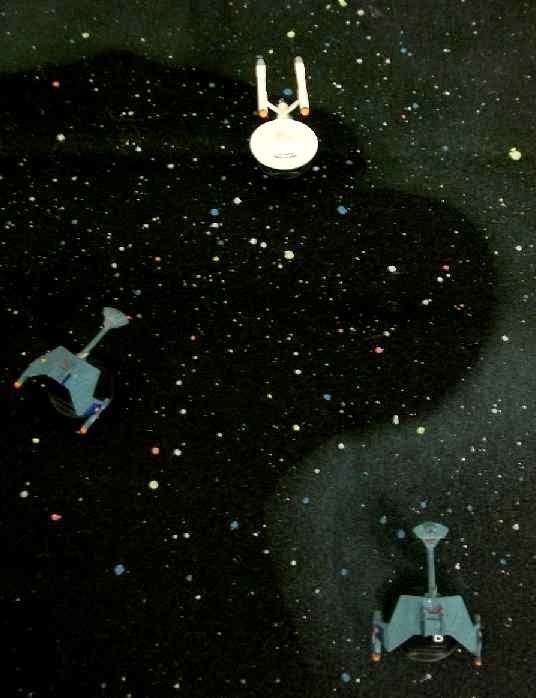 The passing maneuovre fails, and a D7 dies. 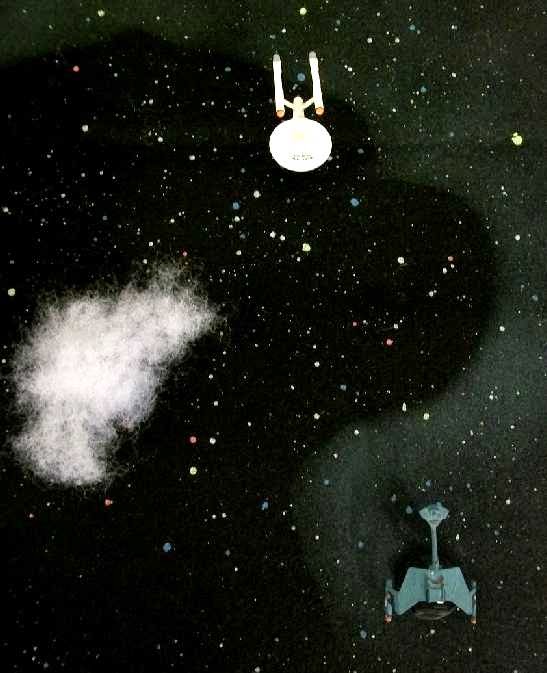 Shouting some nonsense from the Next Gen TV series, the last D7 (the Klothos) decided to "ram these disruptors down their throats" and closes, batteries blazing... 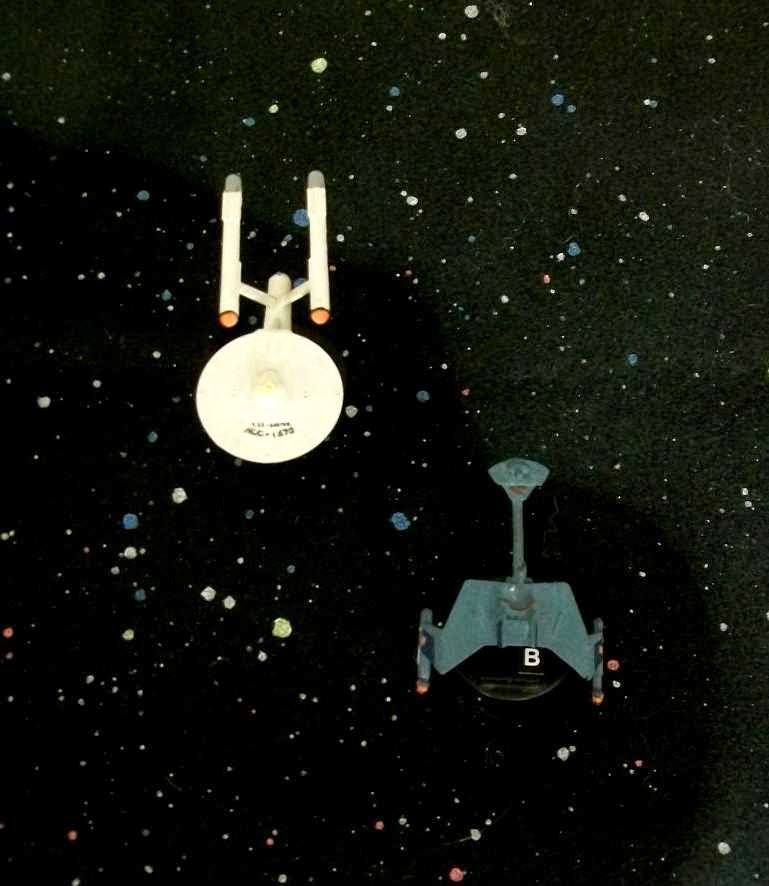 The stars favour the Khomerex (Empire) and the Exeter is dispatched. Ka'plah! 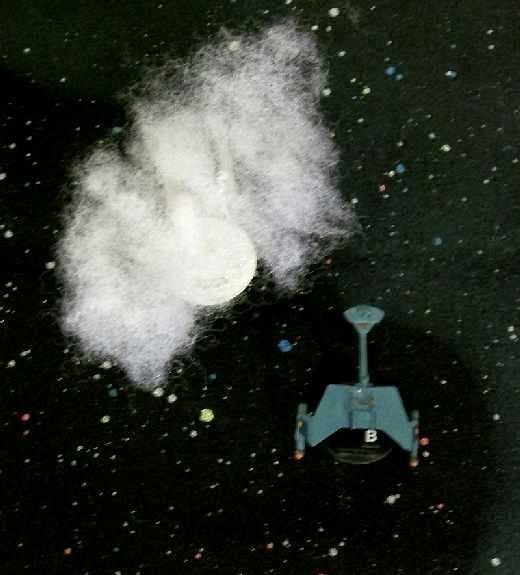 Post Game Thoughts:  These rules, with some genre-specific tweaking, have a lot of potential.  We were able to complete the game in just under an hour, and that included searching for rules, pencils and dice. I imagine we could play a  four-to-six squadron game in two hours, given more experience.

There are some interesting game mechanisms, based on the 5150 house system, where reaction tests are made and are either passed, partially passed or failed. Partially-passed gunnery plagued the Federation in the mid-game, though not badly enough for the Klingons to walk over them.

I plan to bring these rules to the Friday Night Pals and see what mayhem can be wrought - I think I'll add some attack shuttles for amusement's sake.

Look forward to another post in the New Year....Ω