Down the 28mm Rabbit Hole

After slogging away at my 15mm African terrorists for Rhodesia, and working on a new mini scenario for Travellercon, I decided to paint a few 28mm Doctor Who miniatures. This began as a response to a request for articles for Ragnarok magazine and has now blossomed into a mini-spree.

I’m surprised these painted as fast as they did. After struggling with 15mm, these were the proverbial breeze. It’s handy to have a painting guide on line – the various episodes of Doctor Who are available on You Tube. The miniatures are available from Black Tree Design, and I’ve been having nothing but good service from Black Tree, USA.

Ragnarok is the magazine of the Society of Fantasy and Science Fiction Wargamers, and Doctor Who seemed to fit the beer and crisps approach that the SFSFW seem to prefer.

First off the blocks are some Dalek Troopers, led by Commander Lytton, a mercenary from Rifton IV. When the Daleks began to lose their war against the Movellans, they were required to hire human mercs. 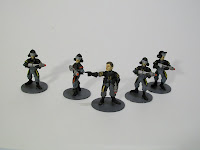 Next is Davros, creator of the Daleks. Crippled by a dirty shell during the Kaled-Thal War. The Daleks are actually figures I painted some years ago to torture my Traveller and Star Wars rpg players. They were from the Citadel plastics line.


Plans are to post some pictures of the Movellans, the #1 enemy of the Daleks, next. They're painted, but first I need to go back and detail their exotic eye make up.
Ω
Posted by kmfrye2001 at 12:48 PM No comments: