This past Sunday saw us engaged in the refight for the power plant on Agidda.

The objectives were the same – control the last nuclear power plant on the planet Agidda. 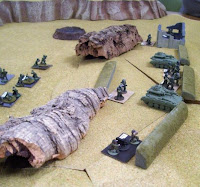 Turn 1 is being referred to as “The False War” since the Imperials tried a repeat of last month’s tactics (they had worked before, which I suppose makes it a tradition, so the Vilani players get points for following tradition). This time the Terran ConFeds had lots of disposable, man-portable anti-tank rocket launchers, a battery of 80mm mortars in supports, also two scout tankettes (think M551 Sheridans) and by turn’s end, the battlefield was littered with burning wrecks, paid for by the Shadow Emperor.

We don’t have many pictures of this fateful turn, because it happened so quickly and we were, frankly, shocked at both the attempt and result, but picture the results of the Gulf War and you’ll have a fair idea.

So the Vilani called a ‘do-over’, which apparently they can do, since they invented it about 4000 BC, and the game was re-set. The ConFeds had one of their tankettes lifted, and the Imperials decided to call in smoke. 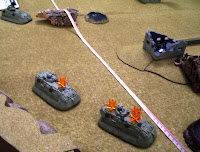 I had mumbled something about smokescreens to the Imperial players before the first turn of the False War, but they wanted to see the elephant, which they did, and as fuggly a big brute as can be imagined, it was. This time, they called in smoke from a battery of 144mm battalion mortars about 8km (24 real feet) to their rear.

Fortunately for the Imperials, I had just finished designing a battery of 144mm mortars for their 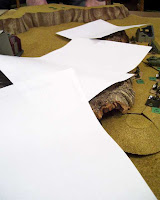 battalion assets two days earlier. With an important assault scheduled to go in, the support REMFs were cooperative (for once) and put down a big cloud of smoke (56cm x 42cm) right atop the main ConFed postion (good calling, Howard…). We had to borrow some sheets of writing paper from someone’s WH40$K collection to simulate the smoke, as I hadn’t yet got round to cutting acetate templates. 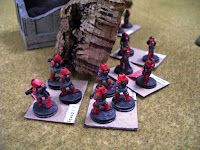 With the ConFeds mostly blinded, the Imperial GEVAPCs again shot forward (again, I’ll credit the Vilani for being consistent). The Imps lost one APC to anti-tank rocket launchers (the 2 squads aboard had to make survival rolls and mostly passed), while the remaining two APC slipped into the fogbank.

Mortar shells were dropping around

the T.52 PD/FP sled while the T.52 was hull down against the ConFed tankette. The tankette fired first (ConFeds have initiative over Imperials while the latter review their “to-do” lists) and missed both times. Now the 44mm mass-driver on the T.52 spoke, and the valiant little tank was sent spinning to oblivion (fair well, Thunderchild!)…

Meanwhile, in the fogbank, something Not Of This Earth stirred – the Vilani were advancing. One of the APCs loomed in the smoke while ConFed troops scored a ATRL shot on it. The APC brewed up while Imperial infantry made survival rolls to debark. Sheltering behind the smoking wreck, the ConFeds peppered the Imperials with heavy machinegun fire. The surviving Imps returned the favour.

The third APC pressed on, and arriving behind the power plant, 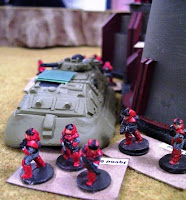 Once again, the Terran ConFed was surrounded by Imperial troops, though the ConFed still retained control of the administrative buildings (and, most importantly, the billing records, which Imperial accountants desperately wanted for customer solicitation purposes).

This time, while victory went to the Vilani, it was a closer fight. I called it a marginal Imperial victory, and the players agreed.

Rules clarifications:
Stands may only fire one weapons type, unless they are firing a RAM grenade, in which case, the RoF of the RAM grenade is 1 and the ROF of any remaining weapons are halved, rounded down. (We’ve been allowing stands to throw everything and the kitchen sink at the enemy…)

While Striker II automatically has infantry stands take a hit when their APC goes boom and falls down, I like the survival roll (against their close-range asset) and I think most players will prefer it, too, as it gives them a small measure of control of their stands.

New House rules
1) Time scale reduced from five to three minutes. Movement rates are similarly reduced to 60% of original. Firepower not effected, but see below.

2) A stand declares any special weapons fire (RAM grenade, TAC missile, ATRL) before standard weapons (ACRs and SAWs): this dice comes off of the stands standard weapon RoF (ACR). Thus a stand armed with ACRs having an RoF of 3 may fire a RAM grenade and a TAC missile (both RoF 1) and have a single ACR roll left.

3) RAM grenades only affect the target stand. The burst radius and drift are unnecessary complications. Fiddly: there, I said it.

5) Stands must target nearest enemy stand unless there is a more dangerous threat (crew served weapon, vehicle, death bot). Self-ordering stands are excepted from this restriction.

Post-game reflections:
Five players are probably too many to run through the level of detail that Striker II involves. I’m inclined to say that four players and a moderator is the working maximum, especially in our case, as we meet on a Sunday evening and most must be in the office the next day.

Striker II, being a grand tactical game, produces frustration amongst old time wargamers and newbies as well, as it flips back and forth between not enough tactical control and too much – movement and weapons is grand tac, while using RAM grenades is more straight tactical, with burst radius proving an unnecessary complication. I suspect this is a result of the second version being assembled by a different “author”, who couldn’t resist adding his own encrustations to an otherwise perfectly fine rules set.

Occasionally I think that playing Striker II is like dating a German girl – no matter how much you may be in love, you never really feel loved back. Ω