As the Holidays approached,  my wife suggested that the dining room table (upon which rested my partially complete 28mm streets) might be a better choice for Christmas dinner than sitting in the parlour, eating from TV trays...

Her logic was inescapable.

So,  I decided to have one more scrum before I boxed up "Lockdown City",  to await next year's convention circuit...if any.

As an interesting aside,  I've found that setting up my WIP urban terrain for six months did *not* encourage me to finish it - I just moved on to other projects. The Boulevard is now going back into the workroom,  where I will once again start painting bricks and mortar.

Using the 5PfH supplement Gangwar, along with Full Metal Anorak,  I randomly generated the next opponent for the Africanus Agency: 'Roid Gangers.  Giving some thought, and considering that Gang War is a generic Sci-Fi setting, I decided to use the Friendsies from Crooked Dice, to represent the Droogs from A Clockwork Orange.  In Gang War, they are rated as 'Psycho' and, hopped up on Milk+Vellocet, rate a d10 Toughness, are armed with heavy melee weapons, but only a single figure has a firearm (shotgun) as fire support.

Additionally, as I could see the repetitive aspects of another solo game, I added an additional mission from Mean Streets, by First Command Games: Bring Him Back Alive; an associate of the Africanus Agency was stranded in hostile territory, and needed an escort back to HQ.

Of course, "hostile territory" can be a relative term - in this case, Clancey Clark,  the Agency's "Banker", had stopped for a barbecued-pork sandwich at a local bistro...that was deep in the enemy gang's deployment zone, while the 'Roid Gangers descended on the West Boulevard.

The first two turns were spent either hunkering down behind some cover (if you with the Agency) or advancing headlong towards melee, (if you were the Droogs/Gangers) your leader shouting vaguely Shakespearean insults about 'vengeance arising from a black and hollow shell..." or some such. 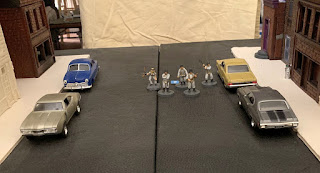 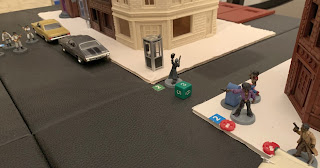 Reverend Bright moves to set up a cross-fire.
Turns 3 and 4: Once the Gangers entered effective pistol range, the Agency let them have it. Due to the chemicals in their bloodstream, the Gangers were difficult to put down, but a suppression is a suppression, and the hail of gunfire slowed them a bit. 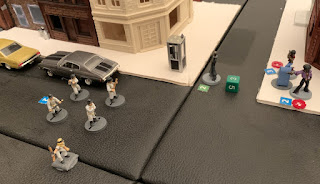 The shotgun-toting devotchka, having fallen back to cover by the '63 Oldsmobile, let loose a blast that suppressed Alonzo.

Turn 5 and 6: It was here that the dice, once again, failed me. I'm not entirely certain what the odds are of rolling two ones, twice in a row, but it sure felt personal. In any event, any advantage the Agency had was now lost, as the Droogs had initiative, threw off their suppression, and charged into melee.

Interestingly enough, while I had been dreading a melee, it was in melee that the Agency's higher quality made itself known. Defensive fire from Afrodite Jones had dropped Dimitri-the-Droog during the charge, leaving Leader Alex to attack alone. In FMA, melee resolution is decisive, and a bad roll is often not only a miss, but a self-wound. This is what happened now - Leader Alex bombed out on his melee roll and received a critical wound. 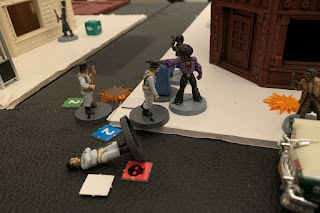 With their leader and henchman down, the Droog's morale broke, and they scarpered off back up the Boulevard. The Agency had made another permanent enemy. 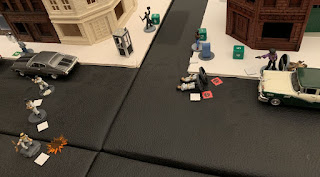 "Time to head home for a bit of spatchka..."
Their secondary objective, Clancey "C-Note" Clark, following the gunfire, came sidling up the pavement, up to the nudie bar. He had cash for the Agency, and by his clock, it was lunchtime.

This was a quick game, with the Psycho Droogs advancing toward melee and closing by the end of the second turn. Without a lot of firepower, they just muscled their way into the teeth of all that Scipio's posse could throw at them, only to be taken down by rotten melee dice. While I found it a bit anti-climactic, that's life on the Boulevard.

Mean Streets is a useful supplement for the combined Gang War/FMA rules set, and introduces primary and secondary missions to the street fight, also a means of incorporating police reactions - especially to gunfire. I'll need to paint up a few more Coppers, since when they arrive, they arrive in force...Ω 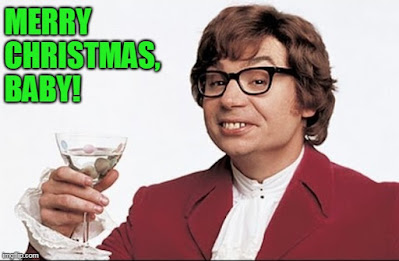 "Ho, ho, ho! Well, if it isn't fat, stinking, billy goat Billy Boy in poison! How art thou, thou globby bottle of cheap, stinking chip oil? Come and get one in the yarbles, if ya have any yarbles, you eunuch jelly thou!"

Presented for your Distraction, and intended as opponents to Little Alex and his Droogs,  are the Ultra-Teens, from the Plot Device range by Lucid Eye Publications.

The miniatures are well sculpted, cleanly cast - presenting few if any mould lines, and have some great character. The figure with the handgun was converted - the original carried the same cane/cudgel as his cohorts. Clearly, some inspiration was drawn from Alex and his Droogs in A Clockwork Orange, but these figures transcend that opus and make their home in a 'Psychedelic themed Future of Dystopian Proportion!'

Set in some presumably not-too-distant future, where bell-bottoms and other 70's fashions rule, The Plot Device revolves around the actions of Super Spies, their multi-dimensional opponents, and the threat these opponents present to the "Psychedelic Golden Age" of a future "Britain".

Lucid Eye has backed away slightly from their first introductory description of the Plot Device, but I was able to locate an early vendor (Sally 4th) which preserved the original fluff text as I remember it:

"Welcome to the Pan-Dimensional Neo Golden Age! The Plot Device is a supreme artifact which eternally becomes throughout all of time and space, a writhing hub of actuality in an eternal sea of probability.

Welcome to Lucidea, City Of The Empire Of All Realities, and look upon The Immortal Dowager Empress, Victoriana V, and her half mad brother, Albrecht, Commander Of The Guard, High Admiral Of The Fleets.

Join the Queen's Favourite, Titus Verne, Psychedelic Superspy, and his sister, Julia, on their missions to protect the Empire from Synthetics, Seditionaries, Insergents and Infiltrators who all plot to bring down The Empire throughout several realities!

Groovy, indeed! This, IMO, sounds like a really interesting and gameable idea. Similar to Michael Moorcock's eternal city of Tanelorn, Lucidea in The Plot Device exists across multiple dimensions, and (I expect) much like Tanelorn, would come under attack from various, trans-dimensional factions. In my febrile imagination, the world of the Plot Device looks a bit like A Clockwork Orange, mixed with Jerry Cornelius and The Final Programme,  and a bit of Jon Pertwee's Doctor Who. As the bloke at the back of the crowd shouted best: "I"ll have one!".

The only hitch, however, is that the Plot Device has not been fully supported, and seriously wants for published material; several years ago, rules and support material for the multi-dimensional, 'Psychedelic Golden Age' were announced, but never released. There is some good news, however, in that there has been a release of miniatures.

Thus far, we have the Hypnocrats, lead by the Wild Lord Saarbrück Thus of the Balefire Club; The gun-toting Suburbanauts, lead by Clinton Shroud of Deathnell Green, and the Ultrateens, led by Zal Krete of Queensway. Perhaps opposing them are the individual agents; the aforementioned Titus and Julia Verne, Candy Peoples, Pryce Compere, Archie Bort (an ennobled monkey), Olga Blok, and as Men Who recently Fell to Earth; Zen Epsilon and Ixym Izveet - alien rockstars and infiltrators.

How will The Plot Device play? We don't yet know, though I'll hazard a guess the rules will be based on the Lucid Eye house system by Rick Priestly. One of the staff commented that the game will have both skirmish and RPG features. If it has a clean combat system with an intriguing campaign background, I expect it to be a hit...Ω