This past TravellerCon/USA, I needed a Traveller-themed miniatures game for the Sunday morning slot, and decided to give "Tears for Arusage" another go.

To prevent the game from descending into the bogged-down slug-fest from LAST TIME, I took a page from DirtSide II and assigned objective markers to various spots in the encounter zone. These represent abstract victory conditions met, so even if a side didn't recover all four missing nukes, it might be possible, through reconnaissance, to find clues where the nukes might be.


Unfortunately, Player #1 (Dan - Condor Legion) took a lucky (or unlucky) hit on the first turn, and it threw his game off permanently.

Player #2, Beta Quandrant Security (aka The  BQS Mercs aka David) won the initiative and deployed their weapons team (mortar) and disabled the Legion's leading APC, incidentally scoring 2 - 3 casualties as well.


The surviving Legion decided to debus ("Call the shop!) and take cover beneath the ornamental-yet-sturdy Vilani-built fortifications. They also were "suppressed".

This is StarGrunt; naturally they were suppressed.

Player #2 (David) had his BQS mercs occupy the housing block and motor pool. A simple quality roll would activate an APC (originally abandoned by the Viliani withdrawal and virtually identical to the Legions vehicles. The objectives (4 abandoned nukes) must be exited from the table on a vehicle.

David kept his mortar team behind the ramparts and used his officers as artillery spotters - not very accurate, but effective in keeping the pressure upon the Legion.


Turn 3 - 4: As an additional stroke of undeserved good luck, the BQS Mercs found one of the missing nukes in the back of a salvaged APC.

Meanwhile, the Legion commander decided to debus his troops from their TL10 mortar-magnets and move to cover, while using the APCs (armed with single .30 cal MGs) as infantry support.

The Legions gambit was pretty effective, in that his two APCs, aided by unexpected reinforcements (more on that in a moment) tied up the BQS Mercs long enough to recover two nukes.


Unfortunately, both Legion APCs were destroyed/disabled by RAM grenades or the LAG AP rifle of the weapons team.

The arrival of a Condor Legion recon team in TL10 air/rafts did cause some trouble, as they arrived on the rear flank and immediately threw fire on the mortar team.

The mortar and accompanying security dashed into a nearby block house and returned fire - suppressing the recons.

At this point, as we were running out of time, the Condor Legion player conceded the game.

Rough game for the Condor Legion. Due to an error (third person) in setting up the map, the Legion was given an extended approach, while the BQS Mercs arrived on board and "Bobs yer uncle!" they were in cover. This doesn't mean Dan had to drive straight down the road, but, to his credit, he was acting according to his briefing, in that no opposition was expected.

The objective markers did help a bit in preventing a huge "pit of suppression" at the silos, and I will use these again in the next re-fight.

I think Dan's counter-attack was more-or-less sound, and if he hadn't lost the first APC, he could have carried off at least 2 - 3 nukes and won the game.

The Beta Quadrant Security Mercs also had a slight quality advantage, being Veterans to the Condor Legion's Regular status. This gave them the initiative advantage about 2/3rds of the time.

Another Excellent NJ-Con Has Come and Gone...

This year's NJ Con excelled itself for attendance, organisation and general coolness.

While I was only able to attend the Friday session, I still had a rollicking good time.

NJ-Con 2017 marked the last run of "The Wreck of the Fafnir Alpha" and it went out with a bang and not a whimper.

Three long-time gaming pals signed up for the final fight, so I removed the Archer/Kane team to maintain balance. It would be the United Radionics troubleshooter team against the allied Rebellious Workforce/Industrial Spies Team.

The Rook (aka "the Mad Bomber what Bombs in Broad Daylight" decided to liven up the game by sabotaging the main derrick machinery. The cheery blaze uplifted the hearts of all who could see it, as it crept towards the main oil storage tanks.

The Troubleshooters must have just knocked over a Gypsy Bodego, because the poor guy rolling dice was obviously under a curse.

The Rebelious Workforce, with a combination of dogs, robots and socialist slogans, was able to drive the troubleshooters back to the helipad and off the burning platform, leaving control to themselves.

Excellent way to end the season...Ω

After nearly 30 years of gaming, I've decided it's time to update my 15mm Zhodani Lift Infantry.

Originally, I had started with early resin Ground Zero Games vehicle mini's back in the 90's, with a combination of Martian Metals and Laserburn 15mm for the infantry. The rules were the original Striker and occasional Ashanti High Lightning for GDW.

Times and tastes have changed, and inspired as I am to do some Fifth Frontier War scenarios using StarGrunt II, I've returned to GZG for the vehicles (and Denizen/Darkstar Ventaurans for the infantry).

For the point defense sled, the 57A hull was used, and a new deck was created from bits of styrene sheet, with a turret from Combat Wombat.

Combat Wombat turrets are nicely shaped, but suffer from a near-future look with too much reactive armour cast onto the turret, so I had to dremel the beggar to far-future standards. Then added some GZG greebles. 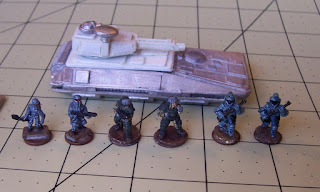 I plan on putting together another platoon, plus company assets (CP, EW, FDC, MRL and PD sleds), for either a large convention game or a Dirtside II game.

I suppose this means I also have to update my 15mm Imperial Marines...hmmm - I should have better thought this through....Ω