Return of the Forgotten Photos: Babylon 5 Fleet Action - The Battle of the Line

Another old set of photos, of a fleet-scale game of the Battle of the Line, from the Babylon 5 Universe, using the Babylon Fleet Action rules from the now defunct company, Agents of Gaming..  AoG was a good, if somewhat self-indulgent, company that produced Babylon 5 Wars and Babylon 5 Fleet Action.

Babylon 5 Wars looked and played a bit like a streamlined version of Star Fleet Battles, and while fun, could take a long time to complete a game. B5 Fleet Action organised mutliple ships  into squadrons, factored in weapons, shields and maneuvre, and enable players to engage in large fleet actions and finish in perhaps four hours.

These are old pictures, dating from 2001.  I think they were taken on film, developed and then scanned.  They were lurking on an old Iomega Zip disk - remember those?  Like a 3.5 diskette on steroids, they were.

I don't quite remember which side won the scenario - I tend to think that the Earth Force had to simply hang on for a certain number of turns, at which point the Minbari, who are up to this point wiping the map with the earthers, suddenly and mysteriously ask for a truce.  The rest is Television History...

I do remember the Evil Minbari Warlord, Myk'Ry'an, upon discovering the location of the Earth command ship (the only carrier on the map, hmm...) decided to concentrate fire, decapitate the Earth fleet, and break my scenario.  Only some desperate maneuvre on the part of the carrier and escorts helped avoid disaster. 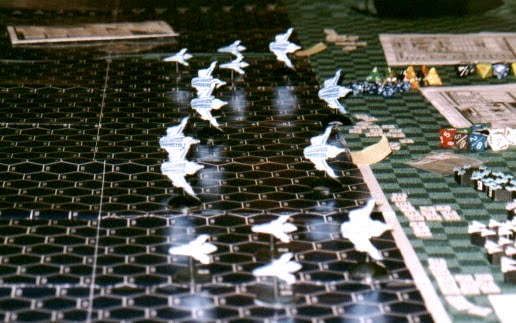 Finding these pictures made me a bit nostalgic.  I think I'll try this scenarion again, or a smaller part of it, using Starmada...Ω
Posted by kmfrye2001 at 8:28 AM 2 comments:

One significant difference is the vehicle weapon mount - those pictured are not supplied with the models as listed, they are from the GZG Grav APC V15-20A.  A platoon of which I've shown painted here.


There was nothing wrong with the auto-cannon as supplied - I'm using these vehicles as part of a Traveller-universe TL-12/13 mercenary troop, named "Spinward Marches Solutions, LLIC".  They need plasma-guns for fire support. (I'll be including a writeup on SMS in the very near future...)

I'm well-pleased with these castings, the parts all fit nicely (I did need to dremel out the gun mount, as I was mixing bits) and the detail is up to GZG's usual excellent standards.
.

One minor hitch was my being able to find, after two year's delay, all of my GZG plasma turrets - only two could be found.  A frantic email to Himself at GZG resulted in a promise to cast me two more, at a very reasonable rate, to include with my next order.