"There was me, that is Alex, and my three droogs, that is Pete, Georgie, and Dim, and we sat in the Korova Milkbar trying to make up our rassoodocks what to do with the evening..."

With that out of the way, allow me to present the Friendses by Crooked Dice. The miniatures are well cast, with good animation, and the heads are interchangeable. Just what's needed to deal out a few tolchoks and lashings of the old Ultra Violence.

During my 1970s Gang War campaign, I found that I needed some hopped up 'Roid Gangers as random opponents, and I naturally thought of Little Alex and Co, a particularly nasty bit of business, yes? Only they needed some fire support, by way of a shotgun-toting little devotchka, modified from the Modern Heroes line, currently available from Lone Gunman Games.

Caveat Emptor: I haven't actually ordered anything from Lone Gunman Games - my set were had from eBay, and the seller (napthyme) shorted me a mini, so...there you have it. You have been advised.

Admittedly, she does look pretty good in the mix. After she was finished, I was surprised to find a female padroog in the very first scene of "A Clockwork Orange", in the Korova Milk Bar, along the left-side screen, sitting with other white-clad droogs. She was also blonde, and had a black head wrap.

The subconscious mind is an interesting thing. 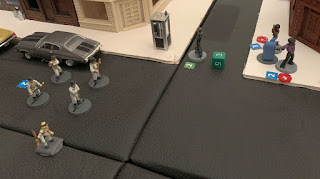 The new gang, who I'm thinking of calling the Drexel Hill Droogs, has already scrapped with the Africanus Agency on the West Boulevard, the subject for an upcoming post.

Chinatown Gate by Knights of Dice 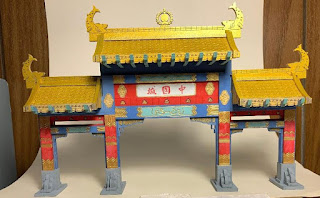 Limping in after buying it one year ago is the 30mm+/- Chinatown Gate, from Knights of Dice in Victoria, Australia. This purchase had coincided with a visit to the Friendship Gate in Philadelphia's Chinatown district, during an adventure to some of the less-well-kept neighbourhoods of Philly. The model doesn't seem to represent any specific structure, but incorporates designs from Melbourne, Portland and Philadelphia, and probably others.

The model itself took about two months - yes, two months, due in part to poor paint coverage over the mdf. This, after having primed it with Krylon White Primer. Acrylic paint doesn't require one coat, or two coats, but at least three coats to provide an even finish - the mdf is thirsty.  And yet, mdf is also slow to dry. Finish the coat, then come back later. So, after an hour or so a couple times a week, over December and January, I took a break, leaving it at about 90% completion, before finishing two weeks ago.

By and large, I'm happy with the result. My main complaint with the model is that the tolerances engineered into the design are too narrow, failing to adequately account for priming, painting and gluing. Instructions were not included and had to be downloaded at the KoD website - and then, they print rather small.  The ornamental fish at the peak of each side roof broke during final fitting. Both sides. Also one of the roof mounts.

Over-engineered as it is, becoming more difficult to assemble as you go, the Chinatown Gate yields a very impressive visual result. Was it worth the effort? Well, where else can you find a 32mm Chinese Gate?

There are two other Knights of Dice buildings, partially assembled and put away on my shelf.  In general, they are scaled for the 32mm+ Heroic scale - they are rather a bit too big for true 28mm. Which is a pity, because they are nice buildings. If KoD could be convinced to offer a reduced size for their standard laser-cut buildings, say to 95%, they would open themselves up to a larger market...Ω