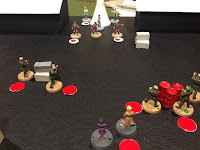 To start, I'd like to apologise for the condition of the scenery - with all the unfinished barracks and black tarmac, it looks like it's waiting for the CGI team to finish. I actually had planned to run the first go at our local club, but thought the game too unfinished for public display.

Without going into the details too deeply, the Villainous Side consisted of three Servitors of the Mist, and three unfortunate human technicians who had been possessed by the Mist.  The Heroic Side consisted of the Third Doctor, Jo Grant, Capt. Mike Yates and four U.N.I.T. soldiers.

On turn one, the lead Servitor approached the Doctor. "You can't be serious," I said to Megz. "The Doctor has four luck - nothing your single servitor can do will hurt him."  Whereupon, the servitor open his visor, revealing himself to be a future incarnation of the Doctor, and hey ho! Swapped his single luck point for the Doctor's four. A well played event card, Megz.

As one might imagine, this dread revelation threw the Doctor for a loop, and it took him a turn to recover his shock.


Then the Servitor approached Mike Yates, and after making an opposed INT roll, hypnotised him into switching sides. Hmm - this is beginning to all look a bit dodgy.


Meanwhile, the three techs been working on a device to assist them in the fight. Once constructed, it provided extra power for the Servitors Energy Blasts, and UNIT trooped began to drop like poorly paid extras.


After a desperate effort to stun the scientists failed, the Doctor and those few UNIT survivors had the flee the scene. The Mist from Mars had gained a foothold on Earth. 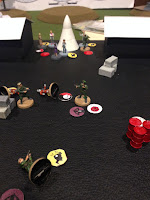 Post-Game Thoughts:  Adding the elements of the Doctor, Jo Grant, Mike Yates and U.N.I.T. added a degree of depth that I felt the scenario, written as-is, was lacking. All of the Rogue's Gallery scenarios are "Kitchen Table" setups, playable in a little over an hour, and intended to be run at conventions in Britain as introductory games between two players.

This last concept doesn't work as well at US cons, where the pitch "bigger is better" and games vie competitively for players. Hence, I usually expand the map and increase the number of forces, and will do so before taking this game to a convention...Ω 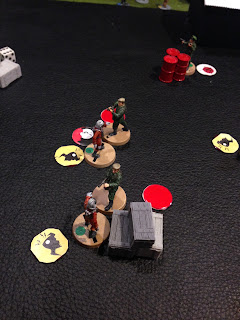