7TV: Children of the Corn Fields

The second post contains pictures of Lady Winterly's Animated Corn Dolls/Scare Crows.
Also from Gripping Beast, these horrors are raised by Lady Winterly's dark magic to wreak vengence on those who scorn the Old Laws or fail to show concern for heath and woodland.
Animation: 4
Detail: 5
Proportions: 4
Variety: 5
Overall: 4.5 out of 5

The village green depicts the commons of Winterly Grange, and is taken from the 7TV Episode Guide "Rogue's Gallery", available from the publishers at Crooked Dice. Plans are to bring this to the Cold Wars convention as an introductory game. 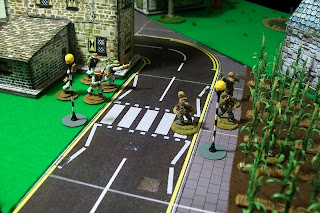 NEXT TIME: A full article on the village and the paper models used will feature in an upcoming post...Ω
Posted by kmfrye2001 at 12:24 PM No comments:

Morris Dancers of DOOOM for 7TV

When I mentioned to the Friday Night Pals that I needed Armed Morris Dancers for a 7TV game, the reaction was a bemused one. Albrecht said that was a sentence he had never heard before.

These were had from Gripping Beast. They came in good time and are perfectly 28mm. Contrary to the listing's description, they are armed with more than just pistols - two, indeed with pistols, and two with shotguns/rifles - though one of the Morrismen is going to have some difficulty unslinging his piece with a "zyder" jug glued to his face.


These represent the servants of Lady Winterly, the severe mistress of Winterly Grange. A devotee of the Old Religion, her family has held sway over the local countryside for untold generations - but more of her anon.
Animation: 5
Detail: 5
Proportions: 5
Variety: 5
Overall: 5 out of 5

The Morrismen are shown with the one trace of modern technology permitted in the village - a Brit-telecom phone box. I think I had the box from Black Cat Bases, but the clear resin ones seem to be discontinued...Ω
Posted by kmfrye2001 at 12:12 PM No comments: