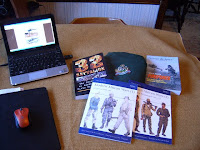 This past Cold Wars I had the opportunity to play in Mark K.’s (of Daddy's Little Men fame) Saturday FireForce game, using 15mm figures and a modified StarGrunt II rules system.

As a result, I am now consumed with a desire to start a new period - 15mm Africa Wars, and yes, my sympathies are firmly with the colonial powers.

Actually, it was my objection to the phrase "Colonial Power" when applied to Rhodesia during Mark’s game briefing that saw me "assigned" to the Rhodesian Light Infantry command, with Megz (and another player) getting saddled with the ZANLA forces. The short end of the stick, indeed.

There were two other players on the side of the elected 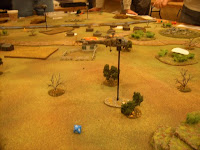 government: a father/son team that for once were neither annoying nor incompetent - a violation of the HMGS charter , I’m sure, judging on past experiences.

The scenario was pretty basic - ZANLA was interloping Rhodesian territory, intent on burning a church, and the Rhodesians wanted to kill them.

Mark did a fine job of combining GZG’s StarGrunt II with Too Fat Lardies’ B’Maso!. Both sides moved about using "blinds" to represent hidden movement.

The game was fairly low-key as far as action goes, though colonial 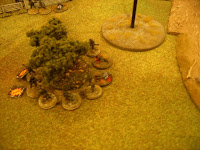 warefare tends to bring out the worst in gamer trash talking; epithets like "savage", "pimp" and "honkey" flew like 7.62mm ammo, and this continued on the drive home.

Up to that morning, I had successfully evaded spending much on wargame goodies - the two sci-fi purchases on the top of my list either didn’t come to the convention or had not brought enough stock.

This changed after the game, when I began to search On Military Matters shelves for books on modern Africa as well as buying a Rhodesian Light Infantry shirt.

The last two weeks have seen me hunting down reprints of the Osprey Africa Wars books, digging out a book read two years ago on the South African 32 Battalion, acquiring Chris Cocks’ Rhodesian memoir Fireforce and roundly cursing Mark K. (aka Clambo) for starting this little landslide in my gaming world.