Work on assembling the bitz for a Five Parsecs from Home game continues; presented here is my crew representing the members of "The Betty" from Alien: Resurrection. Whatever one's thoughts on what the fourth film in the Alien franchise did, or failed to do, the crew of The Betty were an interesting and eclectic bunch.


When painting Sci-Fi miniatures, I find myself greatly slowed down by a lack of vision as to what I'm painting - especially civilians. What colour are the so-called uniforms? Weapons? Gear, etc.?  Re-creating a movie crew helps solve this issue - even if the miniature isn't exactly "spot-on", the paint scheme can be. 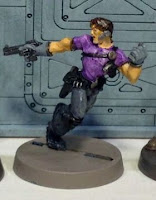 Frank Elgyn: On film, it looks to me that Elgyn is wearing a dark purple under-shirt/vest, with dark grey trousers. Miniature: Heresy 28mm sci fi Ships Crew - Discontinued.  Sorry lads, I bought this figgie about ten years syne. No longer in production. Take it up with Big Boris. 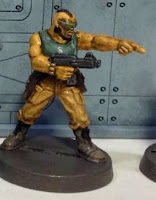 Johner: This Moonraker Miniature/Rebel is actually painted as Diaz from Santana's Crew in "Riddick" (more anon).  It's acting as a fill-in, as I had ordered two different "Grant" miniatures from Hasslefree, with the notion of a head-swap, and got two of the same with different labeling.  I'll need to order again and ask them to correct the error.

Christie: Watching the film, Christie wears a coat that's a blend of gray-green/brown. Also, he's a two-handed shooter. Most important to me, however, was getting his hair right. Moonraker Miniatures has a "Rasta" in their Future Skirmish/Rebels line. His coat has epaulets, which I debated removing, then decided against. The point isn't to model these chaps exactly, just use them as a guideline/theme. I painted the eps in the colours of the Légion Etrangère - if anyone is wearing epaulets in the far future, it will be Le Boudin. 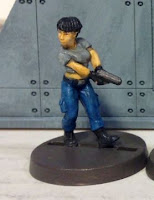 Annalee Call: Another Hasslefree miniature: Kendra. It was surprisingly difficult to find a jumpsuit/coverall-clad female in 28mm scale, especially without heavy ordnance. Thissun was close enough.  In the film, Call is mostly a non-combatant, so the pistol isn't much of a stretch.

Hillard: Another Moonraker Miniature - this time, from the Troopers category. I suspect it's meant as a proxy for Ripley in Aliens.  This is the second Hillard-theme mini painted in as many months.


Vriess: Where's Engineer Vriess?  At the moment, back at the ship. I'm looking for a motorised chair for him, as well as a figure. I intend to paint him both seated and standing, since it's possible to go back in time to before he had his debilitating accident.

Also in the works, seeing that I've tipped it, are the merc crews from Riddick. And possibly some space-cowboys/rebels etc....Ω

As progress continues apace on my Five Parsecs from Home/Traveller project, I've been struck with how few resources are available for 28/25mm old school Sci-Fi gaming, and those that do exist are rather scattered.

"Old School" needs to be defined, I suppose. In my judgement, Old School hearkens back to a time when:

These are the basic qualities, and they may be tweaked as time and experience march on. Other details, like paper maps, cardboard/cardstock boxes and that the scale was more like 25mm, I'll leave off as not compulsory for my particular purposes.

Alternative Armies
Based in the UK, Alternative Armies has been a mainstay of my 15mm Sci-Fi collection, but they do 28mm Sci-Fi, too. The Alternate Stars Space Opera figures are there, as are the old Asgard Space Marines and Adventurers, as well. The 28mm Ion Age also has an Oldhammer Old School feel.

Copplestone Castings
I will admit a personal bias in that I love, and have always loved, Mark Copplestone's sculpts. The Future Wars line embodies all that is good in Old School style - good proportions, not cartooney, reasonable weaponry.  Nick Eyre at Northstar Miniatures has assumed the distribution rights for this line, giving Mark Copplestone greater freedom to design and sculpt new models.

Denizen
Probably the grandfather of the UK companies, Denizen make large 25mm, which will work with moderate 28mm. They are well detailed, even by today's standards, and well proportioned. Lines include Sci-Fi, Fantasy and modern race-car crew and drivers. They do not have many photos of their lines, which they seem to be working to correct, albeit slowly. Denizen have an email-based ordering system.

Ground Zero Games
The Gold Standard in miniature figure companies. Other companies beat each other up over who can be more like GZG. IMO, GZG inspired the 15mm SciFi trend in the mid-90's, and helped usher in the "Golden Age of 15mm Sci-Fi" which only began to wan in perhaps the last year-or-so.

Unfortunately, there aren't many photos of the GZG 25mm line up on their website - one of the very few errors of judgement Jon@GZG has made over their long history.


Mirliton
Mirliton acquired the last-gen line of Grenadier fantasy figures, which overlaps with some EM4's Sci-Fi line. Many of these figures are mirrored on Copplestone Castings website, though Mirliton has been slowly adding some new figures to their line. Given the ruinous shipping rates from Italy to the US, I've been very selective of what I've ordered - nothing, to date. The distributor, Noble Knight, acts as the US source for Mirliton.

Moonraker Miniatures
Also inheriting the EM4 line of Future War/Future Skirmish, Moonraker Miniatures offer many of the figures on the Mirliton site, as single models, at a fraction of the shipping cost.  I have had good service from them, with dispatch, notification and post taking about 10 days.

And now, some Honourable Mentions:

Black Cat Miniatures aka Black Cat Bases
Black Cat has a veritable cornucopia of Old School style miniatures, just not a lot of generic Sci-Fi. What they have do mix well with other moderate 28mm. I've always had good service from Black Cat Bases.

Crooked Dice Design Studios
One of the first companies to understand the Power of Nostalgia*, Crooked Dice entirely qualifies as an Old School Miniatures Company, only they're scarcely a decade old. Still and all, their miniatures are spot-on for the Old School vibe - they just need more generic in their Sci-Fi line..

(*which, by the way, suggests that the neo-PULP genre is the Next Big Thing. Nota Bene!)

Iron Wind Metals
Ral Partha Miniatures live on at Iron Wind Metals. There is a Post Apocalyptic line, as well as a Shadowrun and (although drifting into the cartoon & ridiculous category) the VOR line. I'm not going to list any pictures, due to the abysmal web design Iron Wind Metals employ.

RAFM
Canadian company RAFM has a few figures that work for Sci-Fi in their USX Modern line.  They also have a line of the old Reaction Marines - though these are too far gone into the bulky/cartoony style to fit me definition of Old School. If anything, to my mind, they are Oldhammer School.

Personal note: without exception, I like RAFM's miniatures, a lot, only I've never seen a company work against it's own interests the way RAFM seem to do*. From frivolous Indiegogo campaigns ($18,890) to (edit...) some questionable marketing skillz, it's almost as if RAFM is playing at Gollum: hating and loving themselves.

(Edit: I've redacted my observations regarding how RAFM posts to the USA, having tried an exercise using Canada Post - I can see that RAFM's method is a much sounder one, and I apologise for seeing a bug where there's really a feature...)

End of day, it's easier for me to order RAFM through third parties - once again: Noble Knight.

Reaper Minis
Another of my favourites, Reaper Minis tend to be a trifle biggish, though not incompatibly so. Their Chronoscope line as a number of Old School Sci-Fi minis - you must be willing to search for them.

Rebel Miniatures
Rebel Miniatures has a 28mm Horror line, and a 28mm Sci-Fi line (as well as a plethora of 15mm lines). Some of these figures fit quite well in the Old School genre.

Rebel Minis seem to be another of the companies that hasn't quite found their footing, unless it is to provide miniatures for Two Hour Wargames. During the 15mm "Golden Age" they added to their 15mm lines quite prolifically, and now they are flirting with 28mm. I hope they continue to expand their 28mm Sci-Fi line, and not go too far into the blocky/cartoony aesthetic.

Scotia-Grendel
Scotia Grendel has the Kryomek Line, the Void Line and the Urban War (ex-Urban Mammoth) line. These lines, in my opinion, straddle the Old School/New School line, in that they display the beginning of the video-game reality, with odd profiles, weird creatures, etc. Some of the Nexus Marines work very well with Old School themes.

Closing Thoughts
This list cannot be compleatly exhaustive, and there are lots of smaller startups offering "one-shot" miniatures which may, or may not, fall under the Old School Sci-Fi umbrella as I'm using here - that said, feel free to offer additional suggestions, in the comments, if there's something you think I've missed.