Normally I don’t like to display non-finished work; these have been sitting on my workbench since last November. If the topic hadn’t come up on The Miniatures Page, it would never occur to me to put up these pictures. 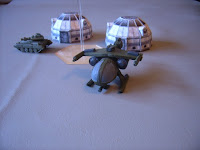 I've modified two Laserburn 15mm Scythe Jet Copters (available from 15mm UK) to take the wings of Force XXI’s Wraith VTOL Gunship. I realize that a grav frame mightn’t need to look like a ‘copter, however I wanted something that vaguely evokes the MH-6 “Little Bird” for a sci-fi version of “Black Hawk Down” scenario. That’s been under development since last October (I work slow, guys…)

The chin-mounted chaingun is from Stan Johansen’s 15mm/25mm accessories line. 4” clear plexi stands are from Litko. 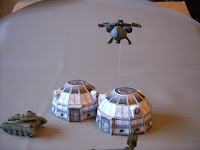 I had thought to trim off the wing-mounted railguns, since the model is intended as a light support VTOL, but decided that the wings look better as Mel at Force XXI designed them.

Aesthetics are everything.Ω
Posted by kmfrye2001 at 8:28 AM No comments:

Gaps in the Posts

Not much new hereabouts – early in December I was in the hospital with a record-setting blood glucose level (think “Battle of Hastings”…:D) but I’m much better now and, as my eyes have gone back into focus, I hope to be adding more posts soon.Ω
Posted by kmfrye2001 at 9:15 AM No comments: