Most of my readers already know that I don't like to show gaming on unfinished projects - it's simply one of my little peccadilloes. The lock down, however, has me stalking about the house, muttering like the mayor from "Jaws" - "Get past Memorial Day...Maybe we can save the summer...etc..."

And so I decided to have a wee scrum, using Nordic Weasel's Gang War rules and Full Metal Anorak, setup on some terrain that will eventually look like 1970's West Columbia Boulevard, Philadelphia.

Please excuse the foamboard pavement and unfinished buildings. Also, don't mind the gaps - they will be covered with crossing lines and other road markings.


The scenario was generated using Gang War, with some modifications to make it less Apocalyptic. Five orange "Points of Interest" were set up around the 4-foot square playing area. These are either worth money ($100 each), are worthless, or result in a hazard (large sink hole, crazy wino, crack head, etc.) As these can remove a figure from play, they are best collected after resolving all game combat.

Also, it's a smoggy night, and all missile ranges are limited to 9".

Scipio "Africanus" Norton and his agency squad are cruiz'en the hood, collecting debts and looking to keepin' it peaceful, when they spot a group of Tong Boyz fixing to expand their territory. The squad sets up to defend.

The Boyz are the Red Elephant Tong; in FMA terms they are Trained/Motivation 3, with some Improvised Hand Guns. They are rated for Gang War as 'Aggressive', meaning they will advance on their opponents by half their movement at least, and will use available cover. Their leader is rated Average.


Scipio and his Agency are slightly better - all are average, with MOT 3, and armed with pistols, except Ravelle (who is rated 'Trained' and armed with a shot gun).

Turns 1 and 2: were spent with the Tong Boyz advancing and Scipio's Squad taking cover (using "In Position" markers for an additional bonus).

Turn 3: Two of the Tong Boyz peeled right to flank Afrodite and Alonzo, who have taken cover by a 1970 Chevy Chevelle (as seen in the 2K release of "Shaft"). The leader and his two Tong-mates took cover by the phone booth and yellow Pontiac. Ravelle fired his shotgun at the lead Tong and missed. The Tong returned fire at Ravelle (crouching by the cab) and managed to knock him out/seriously wound him. "This game is rigged!" he muttered as he passed out. 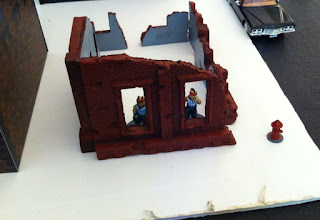 Turn 4 and 5: With Ravelle down, Scipio was outnumbered. The lead Tong member fired, missed and then charged. Scipio shot him down...mutha&#@%!  This while the two Tong flankers, sheltering in a burned out building, negotiated the uneven ground over the two turns.

Turn 6 and 7: Scipio put the charging Tong down, when the leader followed in a shoot-then-charge moment. Scipio was hit, but shrugged it off ("Ain't no thing at all...") and capped the leader with a Spectacular Death.  The rest of the Tong failed their morale, except the phone booth shooter who charged.

Turn 7 (continued) Scipio took a point blank shot at the charging Tong, and missed. The TongBoy then failed morale, and ran for the cover of the phone booth. Scipio put one into his back, and the TongBoy went down. That was enough for the last two survivors, who fled down the boulevard.

The result was a clear victory for the Agency. They made an Enemy of the Red Elephant Tong Boyz (We'll Be Back!), but between picking up POIs and winning the scenario, they netted $600. Ravelle had a local "Doctor" check him out, and the wound was light, only keeping him out of the next tussle.

Scipio was thinking "It doesn't get much better that this..." when his fav'rite bar suddenly opened for business.

This scenario was originally being prepared for a 7TV 1st Ed. game, only I hadn't finished adapting those rules from their British oeuvre to an American, Blaxploitation-themed one. Full Metal Anorak is flexible enough to handle this well.  Nordic Weasel's Gang War, though set in a post-apocalyptic world, also adapts well to handle a vigilante campaign, revolving around a neighbourhood "fixer" and his cohorts.

The odds are in favour of our protagonists. Despite that, Ravelle went down in the first exchange. I made a mistake with the Tong leader, as I should have sent him down the right side with the other two Boyz - I thought about just arbitrarily moving him, but then I heard Scipio (in my mind) say "Don't you mess wi' them figures, boy." I decided to let the action unfold automatically.

There was a bit of after-action drama - one of the POIs turned out to be a hazard...


A successful Save vs. Int and a Franklin disarms the situation...Ω

Work continues apace on my 1970's game. In searching for some civilians as collateral damage/light backup, I discovered Old Glory's SuperFigs Civilian Pack #1. These are listed as 33mm on the Old Glory website.

These were living in my cart for a bit, whilst I debated how much bigger 33mm was compared to 28mm.  As it happens, at least in this case, the answer was "not appreciably".

Below, the same miniatures are presented on a 1-inch grid, alongside a 28mm Copplestone Casting, painted as John Shaft. Taking into account the height of the slotta base, one sees immediately that the minis, even if mounted on standard washers, are size-compatible with regular, non-heroic 28mm.


Especially pleasing is finding two figures as a news team, and one as a photographer. Two of the figures will join my Funkadelphia street crew, as will the gentleman with the wine bottle. The rest will become random street civilians  The boy with the ball is interesting - obviously a football/soccer ball - but not appropriate for 1970 Philly unless he's attending one of the private academies...