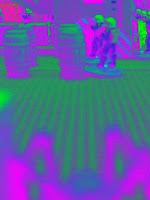 This past Sunday, Megz and I had a quiet, post-Easter-dinner game using the 5150 rules. While I’ve read the rules through several times over, this was the first time I was actually using them - to resolve an encounter between a squad of Star Marines and a bug infestation, aboard a derelict freighter.

Using the Traveller Universe as background, the freighter I.S.S. Trope-McGuffin arrives in-system several weeks overdue. She was to deliver an important case of hamdingers to the Viceroy of the planet Torgo X. When she proves unresponsive to radio hails, a squad of marines is dispatched via cutter to investigate and if possible, recover the all-important hamdingers.
.
Oh, and find out what’s become of the crew. Carry on.

Using a combination of Denizen Federation Space Troops and WOTC D & D aberrations, I set up the Cargo Bay of Doom. One of six red cannisters was marked “hamdingers” and then placed randomly so that even I wasn’t sure where it was. Then, with a clang and a hiss, the airlock door opened and the marines entered.

Each marine was assigned a 5150 reputation of 4, which represents your average military, a jobbing squaddie just trying to get through a sidereal day in an uncaring universe. Reps range from 1 to 7, with 7 being roughly demi-godlike (Alice from Resident Evil 3 springs to mind - as she often does *numnumnums* - as does River from the film Serenity) while a 1 represents a particularly inept, sickly, or aged role-playing gamer type). The lieutenant leading the squad and his sergeant were rated as Rep “5”. The infesting bugs were rated as “4” as they too, were just trying to get through the day. 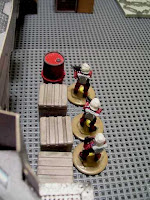 Turn 1 was spent with the marines advancing cautiously into the cargo bay, led by fire team 3 (aka “The Young Expendables”), while yours truly added to the atmosphere by making alien skittering noises under the table with his hand. Megz doesn’t much like bugs, so I would think my attempts at humour had a soothing effect on her nervous disposition.

Turn 2 was going smoothly – fire team 3 opened their red canister, but no joy. Fire team two entered the next floor tile and thus triggered an encounter. 5150 has a table (5150 has lots of tables, but let’s come back to this, shall we?) that has you generate numbers of xenomorphs randomly. Megz rolled a maximum encounter (and that was the last decent roll she made all night) and suddenly the marines found themselves being charged by large, spiderlike aliens from opposite directions – they were caught in the middle. 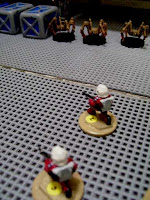 5150 has squaddies make a reaction roll as the aliens sped towards them:
“Holy f---, they’re chamax!” someone yelled into their comm unit.

The Chamax Plague, a nasty species of arthropod the size of a great dane, with a mouth like a buzz saw – an hungry buzz-saw.
Reaction dice were rolled.
And everyone froze.
Except the bugz.
Oh bugger. 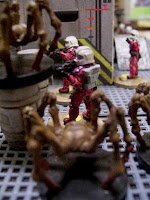 Xenomorphs in 5150 move at a constant 12”, whereas a human moves at 6” to 8”. You can see the potential for troublesome interactions.

The squaddies of team 3 just stood there as three chamax rushed them from the shadows.
Turn 3 – fire team 3 ran for the stairs to the 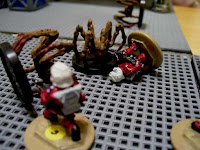 upper walkway, while team 1 took the charge from three chamax that had rushed out from under the platform. One chamax was knocked back while another took an “Obviously Dead” result. Time to check for where the blood sprays.


“Don’t tell me they have acid blood…” said Megz.
“All right, they don’t, except this one, which does.” Quipped I. Megz was not amused.

Turn 4. Team 2 was getting frightfully chewed up. The chamax were rated as Rep 4 and “vicious”, which meant that in melee, they are given an extra d6 advantage. A squaddie throws two d6 to successfully roll his rep (or under), while a chamax rolls three dice (including advantage). There isn’t really any “wounded” result in 5150, either a figure is dead, alive, knocked down or out of the fight. (Out of the fight is similar to StarGrunt’s “Incapacitated” – you don’t know how bad it is until a medico looks at it…) 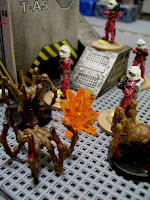 From atop the walkway, a hail of grenades rained down. The way she was rolling for firing, Megz decided a little area-saturation was in order.

Standard grenades in 5150 seem like they’ve been neutered by the game designers, possibly because the rules governing their availability are relaxed – if a squad has them, they have all they need (kinda like the US army – take all you need but use all you take, we’ll make more)… Grenades have an impact of 2, so you must roll a 2 or less for a grenade to be effective once you hit. One more chamax burst, spraying acid blood. 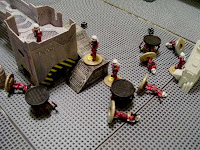 Turn 5 (and wrap) – the grenades had some effect, as did the Eltee and Leading Sergeant entering the mix. The last two chamax died messily. Five squaddies were down, and the marines had only explored two tiles.

Megz was not amused.

Then I told Megz her squad had really been whacked by a random encounter, there were more chamax waiting on other floor tiles.

“How many more of those things can there be?” asked Megz.

“Well” I said “the ship’s probably full of them. The rules say that we roll two d6. You could be outnumbered by two-to-one.” (In my mind, I had already replaced the “Bugs” table with the Xenoform table to avoid the possible outnumbered-four-to-one result…)


Post-Game Thoughts
“To Hit” in 5150 is non-intuitive. All skill checks are based on rolling Rep or under, but not so ranged combat. You must roll a 10 on a d6 to score a free-and-clear hit (you can roll a hit on an 8 or a 9 , but some cover will negate the success). You do this by adding the firing figure’s Rep. Or not, as the dice would often have it. Little square bastards.

Possibly I’m jaded by StarGrunt and the Full Metal Anorak system, but it would seem to me to be more consistent to adjudicate a hit using the same skill system that REP is based on. Pass 2d6: hit in cover, Pass 1d6: hit in open. This would require the use of a saving throw, which to me seems faster than searching for a chart.

Grenades – I’m inclined to dispense with the “Everyone’s Got the Grenade” rule. With the availability of Litko tokens, keeping track of grenades should be a simple task. In doing so, I’m inclined to give a standard grenade an impact of 3. Or possibly not.

There. Are. Too. Many. Tables…
Truly.
Or so it seems to me. Possibly we’ll get the hang of it in the next game, as the author often maintains this will happen when posting on The Miniatures Page. We’ll aye see….

Plans for the next 5150 game will involve two sides of opposing sentients, to provide a more traditional feel to the firefight. Probably Imperial Marines vs. Zhodani, sans warbots (since 5150 doesn’t cover bots, just yet).