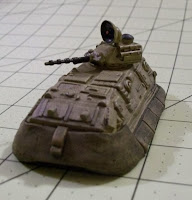 The Type 53 uses the standard Imperial Type 52 hover-sled chassis, with the addition of a larger turret housing a 44mm mass-driver and coaxial VRF gauss gun. Most of the infantry stations have been removed to accommodate the sensors and fire control computer.  The MD gun is designed to destroy light tanks and APCs/AIFVs, though it can also be used to shoot down indirect-fire munitions.  Supplementing the main gun, and linked to the main fire control is the coaxial VRF gauss gun. The VRF gauss gun is tasked as the primary Point Defense and anti-infantry weapon.


The majority of armored vehicles in Ziru Sirka service represent some sort of trade-off, and the Type 53 is no exception. Designed to provide medium fire support to infantry, the Type 53 is also tasked with providing point defense against enemy missiles, rockets and artillery shells, leading one Terran military expert to describe the Type 53 as a cross between an alligator and an ostrich.
The 44mm MD gun being insufficient to penetrate the front armor of most ConFed tanks, the T-53 mounts four 84mm anti-tank missiles in the anti-armor role. Missile reloads are stored in the vehicle: a veteran crew can replace each spent missile in about a minute per missile.
Critics of the Type 53 often cite the weak armor (easily penetrated by the latest RAM grenades) relative slow speed of the missiles, and dual role.  By combining fire support and point defense into one vehicle, the Imperium has essentially created a high-value APC that looks like a tank, hunts like a tank and draws fire like a tank, while having none of the advantages of a tank.

The coaxial mounting of the main gun/VFR gauss gun forces the Type 53 crew to concentrate on one task at a time (either Fire Support or Point Defense), which proved limiting during the Interstellar Wars.


During the later period of the Interstellar Wars an additional VRF gun was mounted atop the turret* displacing the EMS sensor dome. This allowed the upgraded Type 53 (designated Type 53A1) to engage multiple targets without degrading performance....Ω 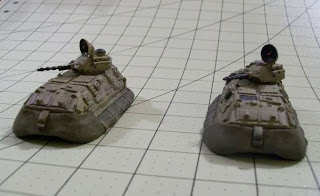 *the Frontier Legion is credited with salvaging a Type 52 and creating the first Type 53A1 prototype. Imperial Quartermasters deny this, of course, as the proper patents were never submitted.