This was a scenario I created using StarGrunt II for GZG-ECC back in 2006, so it's a bit old.  It's based on the premise that Princess Leia was gambling when she disclosed the location of the Rebel Base to Governor Tarkin; "They're on Dantooine." 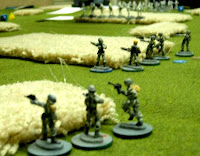 Warning - some of the piccies are a trifle blurry. Chalk it up to adrenaline.

The SitRep: An Imperial light scout force has arrived at Dantooine while the rebels are preparing to evacuate the planet. Because it is a light force, only four squads of Stormtrooper, a half-lance of Scout troopers, and a pair of AT-STs are all the Empire has to capture the rebel base.

The rebels are defending with four half squads of Dantooine Commandos ("Defending Dantooine from the Empire since 8:00 AM") with two Atgar P-Towers and two anti-infantry Dish TV guns. 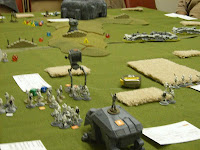 Regretably, I can't tell you how the scenario ended - both sides seemed to enjoy themselves, and there was opportunity aplenty for each side to put the wack down on some minis.  As per usual for a Star Wars game, I have a time limit on the Imperial victory objective, the rebels having only to avoid defeat and live to fight in another sequel. 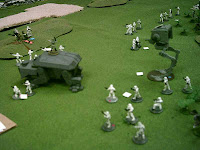 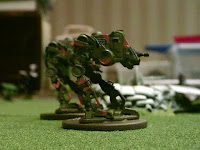 Perhaps I will run this again at Fall In! or Cold Wars...the nice thing about running Star Wars games at conventions is you don't often get the die-hard serious gamers who throw their dice (or minis!) when their Imperial Garde fails to rout some Dutch-Belgian militia (not that I've ever had that happen...- Ω -
Posted by kmfrye2001 at 8:59 AM 2 comments:


This picture is in response to a discussion on The Miniatures Page concerning the useability of the old I*Core Void Tiger APC in the Star Wars mileau...res ipse loquitur...but now I've found some old pictures to share.

It's been a terrible year or so for Classic Doctor Who fans - Mary Tamm has gone.

She was the lovely, cool, droll Time Lady Romanadvoratralunda who was teamed with Tom Baker for the 1978-79 season of Doctor Who.

She was only 62, and had been battling cancer.

Collins on TMP made a wise observation - in miniature modeling, having the numbers for a military unit, especially an alien one, is often more important than having the script (only I will be regretting these words when I finish up my Aslan AFVs...)

A few years ago, I was working on a 1st Imperium army, and needed Vilani numbers.  At the time, there were no images, so I cribbed the numbers from Traveller Adventure 1 - Annic Nova and planned to use them for decals on my Imperial Armour.

The Annic Nova is a ship of non-standard, alien design that the players of Adventure 1 are sent to investigate. One of the discoveries is that the name "Annic Nova" stenciled on the strange nacelles is actually a serial number, in the style of that pictured above.

Looking at the Vilani Font, one will immediately see a similarity, suggesting that these numbers, if not Vilani, are at least Vilani-inspired.

(NB: I can't tell you what I wrote there - it was four years ago.  There's a very good chance it is in Bilandish, or it might be a reminder to drink your Ovaltine...)

Traveller pedants insist that the two *cannot* be related, as the Vilani, as core members of the Third Imperium, would hardly be unknown to player characters.  Others counter that a similar reaction might be had if your average salvage driver saw the Greek alphabet.  I think that the Vilani came later in the minds of the Traveller creators, and they adopted a neat numeric style to fit them.

Here are some pics from TravellerCon 2010 which I previously neglected to upload, probably because the scenario didn't play as well as I'd hoped. This was based on an adventure from the defunct QuickLinks Interactive module: Merc Heaven.

The setup: It's the Imperial Year 996, and the Solomani Rim War is in full swing. In a remote backwater sector of the Gateway, the Sollies are working to destabilise an Imperial client state on the planet Arusage. The Imperial Navy hires mercenaries to shore up the Vilani-cultured client state.

The fighting revolves around an abandoned Vilani nuclear base, except that when the Vilani withdrew, they forgot to bring the nukes. The Solomani-backed Condor Republic has over run the region and the Imperial mercs must prevent them from carrying off the nukes.

The Imperial mercs were operating well behind enemy lines, and according to the pre-game intro, had walked in from a drop-off point about 10 kilometres away.  In addition to their Advanced Combat Rifles, they had only light support weapons - a mortar and a 20mm LAG. They would have to work fast, find the nukes and some transport and then get out, because the area was teeming with Legion patrols.

The mercs had access to an air strike, which would shift the victory margin one step in the Legion's favour - pilots don't like getting shot down behind enemy lines.

The Condor Legion had local reinforcements, mainly in the form of Air/Raft Recon units and the odd APC carried section.


The tech level gap was negligible, TL9 Legion to TL10 Mercs. Numbers were also about even - with a platoon each.  It would be a pounding match.


The Condor commander decided to ignore the single mortar that the Imperials deployed, much to his subsequent regret.

The Legion eventually got two nukes on an APC and ran for the border.  The Mercs called in the airstrike, which destroyed the APC about four inches from the table edge.

You can see that neither side of players is particularly enjoying themselves. This is in part due to my converting the scenario so that it is so balanced as to be a stalemate. Not much fun, that...

Another issue was the use of dummy counters.  I think they add a great "Fog of War" effect, but some players don't like not knowing what they're dealing with.

The Condor Legion commanders at left.  Contrast with the players at the table to the rear.

Mark Klambo is not looking his normal, ebullient self...
Guy in the middle is contemplating "using the tooth..."

(I think I had just snapped an answer at Mark, as he has something of that "what a b!tch" look about him...sorry old boy...and get your elbows off the table)

The final realisation is that, verbum sapientii,  not all elements that make for a fun RPG scenario will transfer to the miniatures table.  The big "gotcha" in the module is, after landing behind enemy lines, avoiding enemy patrols, and infiltrating the base, the players are met with the sight of the Condor Legion loading nukes into their vehicles.  The "Just In Time" hook doesn't work so well for a miniature game, because there's no way to build up the same tense atmosphere an RPG can.

Viewing these pics and looking over my notes, I'll have to give this scenario another go - perhaps with the Friday Pals Brigade, who boast a number of former military vets, and a suitable tweaking...or not... Ω