The scenario was tweaked to reflect a Traveller: Interstellar Wars setting.  The Vilani 1st Imperium was laying siege to Mikanek, the capital city of planet Agidda.  After months of bombardments and probing attacks, the Terran Confederation defensive lines were beginning to strain. 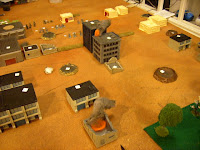 In the quiet (until the past few months) suburb of Soos, a heavy Vilani bombardment with a coordinated push by armored elements has caused the Terran lines to buckle, and for a change, a local Vilani general has taken the initiative and pressed the attack.  The word is given all along the line – break through to Mikanek Downport and seize the Terran supply depot.

The Imperials were attacking with three GEV MBTs, plus an armoured recon section of two hover medium utility vehicles (MUGEVs). They were to exit three vehicles on the opposite side of the 4’ x 4’ playing area by the end of the sixth turn to win.

The Terrans were defending with a platoon of the Planetary Defense Regiment (three squads plus a command post section) reinforced with a squad of Terran ConFed Marines and a section of Planetary Constabulary Special Weapons Team.  The Constables were given high movement to reflect local knowledge of the area, and a mucking big LAG anti-material weapon.

Each Terran squad was given an ID counter and two “dummy” chits to deploy on the table for “Fog of War” purposes. The idea was to slow the Imperials down with active use of the dummy chits.  For how well this worked, you will soon read.

To win, the Terrans simply had to keep the Imperials from achieving their objective.

We used the StarGrunt II rules, with modifications improving armoured vehicles' survivability. To reflect the effects of a prolonged siege, all units tested morale under the Low Motivation column of the quality test chart. Additionally, the PD Regiment began the game with a lowered morale level (Steady).

The Terran players (Brecht and Kenzie) were allowed to set up well forward, with only a 12” band on the Imperial entry area off limits to their squads.  The Imperials set up within this 12" band, in the park.

The scenario began with the Imperial MUGEVs scanning the nearest bomb craters to see if they could spot the chits that had been placed there. After two failures, the Imperial player (DeeJay) decided he’d had enough of Terran duplicity and began the recon by fire.  I ruled that if the fire was fully effective, a dummy would be revealed, if the fire was partially effective, the chit would be “suppressed” (and therefore remain a hidden “threat”)  and an ineffective fire would simply be ignored. Firing two VRF gauss guns on the two chits, he rolled fully effective fire.

A quick word about the personalities playing this scenario.  Kenzie is a scientist-techie sort, Brecht is a former Marine NCO, and DeeJay is a former tank Junior Officer. In giving out the forces, I did a bit of typecasting.

Beginning of Turn 2, the leading hover tank took an IAVR (Infantry Anti-Vehicle Rocket) in the top turret from an upper floor of a nearby building - the Planetary Defense squad there wasn’t waiting to be discovered by a recon by fire.  I’ve modified SGII by giving armour “quality”. The Imperial tanks were 4:10 armour, meaning that four d10 (instead of 4d12) are used when testing for damage.  This is to help emulate the different tech levels in the Traveller Universe.

The rocket bounced off the armor.  I don’t check for a systems hit unless there is a penetration (finding the rule to contrary in SGII infantryman-written nonsense) The tank replied and fired their Direct Fire Plasma Gun into the upper floor. Partial success suppressed the PDR squad.

This was to be the pattern for the next two turns.  As the tanks advanced, they would take a rocket hit and the Terran would roll terribly on the result. The Terran Marines had a longer-ranged missile version with a similar result (though in retrospect, I think I missed a minor penetration on one of the tanks. A hull hit should have resulted in the crew “de-bussing”).

The Constabulary unit was having greater success dealing with the Imperial “soft skins”.  Using a 20mm LAG Anti-Material Weapon, the Police surprised one of the MUGEVs and put a round through the engine block (or plenum chamber, Winchester Drive, What Have You).  The following turn, the coppers took out the other soft target.  Two vehicles down, one to go.

Turn 5:  Things were not going well for those squads tasked with stopping the tanks. Many buildings
were now burning. Three PDR squads were either dead or out of action. A squad essentially had to trade itself for two chances to take out one tank, and the dice were distinctly unsympathetic to the Terran Cause (all of the Vilani House Deities were guiding the rolls). 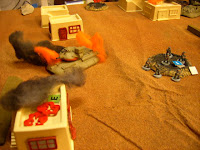 The lead Imperial Tank was inches from the exit point. As the Terran Marines were falling back to the questionable safety of a blast crater, they fired their last anti-tank missile...

The tank brewed up.

The stunned silence was deafening....which is rather an awesome result.

General discussion was that this was one mother-tough scenario, for both sides. DeeJay said it was every tanker’s dream scenario – the kind of dream from which “you wake up screaming!”  Brecht said the infantry really needed some heavier anti-tank weapons. I think that is the point of Jason’s scenario – it’s good to play a scenario that’s a bit unbalanced.

Around turn three, the Terran players woke up and began to “play hard”.  The dummy counters began to move around more aggressively (distracting at least one tank for a round or two). The Command Post began to reactivate squads with better coordination.  I suspect that the defenders realised the scenario wasn’t a “Tank Canning” game, but a nasty situation where “expendable infantry” meant exactly that.

The armour modifications I've made have made tanks in my SGII games much more dangerous, which, IMO, is how it should be.
There is a “prevailing wisdom” on the internet (an undoubtable oxymoron) in which tanks in an urban fighting area are doomed to fail.  This may not be supported by every infantryman alive, just the ones I talk to.  Tankers believe the opposite.  I suspect the reality lies somewhere between.

By the way, the title of this article provoked a joke: How is Vilani Armour different from Spam?  They're still canned meat, just "Bilander".