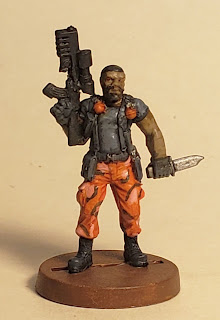 Yes, admittedly..."Ghosts of Mars" was a fairly disappointing film - especially at the time of release. However, compared to what's being turned out nowadays, that movie is now classic cinema gold.  Recently, having viewed a dvd version, I decided to paint up one Desolation Williams.

I used the RAFM miniature Karl Unger, from the USX Modern Day Heroes line, which had been loitering around my painting table for nearly a year, as the basis for my Williams - the weapon was easily  swapped from the stock, and there was no other modification necessary.

Aside from the Martian Red Desert Camo pattern, the colour palette for the character is very narrow - black undershirt, black webbing, black gloves, black boots. Yes, John Carpenter was quite burnt-out in anno 2001...

There's actually no scenario from "Ghosts of Mars" that I'm eager to play - it's just 'Zombies meet Wild West on Mars' which doesn't really interest me, tactically. That said, if I can find miniatures suitable for "Uno, Dos, and Tres", I'd paint them up to complete the posse...Ω